Welcome to our FIRST EVERY Virtual Book Club!

We'll start things off with the 2016 book published by St. Martin's Press and written by author Jack Kelly, "HEAVEN'S DITCH: God, Gold, and Murder on the Erie Canal."

Schoharie Crossing State Historic Site will do Online Weekly “Check-Ins” to discuss the content, chapter status, and highlight some interesting history. We'll ask for you to submit questions about the reading during the week so we can address them or pass them along for the "wrap up" Q&A with the author.

Final Q&A with Jack Kelly will be in early September:

Hear Jack answer questions submitted by readers and discover his process, thoughts and research while he was writing Heaven's Ditch. Find out what he has in the works, and more!

“The technological marvel of its age, the Erie Canal grew out of a sudden fit of inspiration. Proponents didn't just dream; they built a 360-mile waterway entirely by hand and largely through wilderness. As excitement crackled down its length, the canal became the scene of the most striking outburst of imagination in American history. Zealots invented new religions and new modes of living. The Erie Canal made New York the financial capital of America and brought the modern world crashing into the frontier. Men and women saw God face to face, gained and lost fortunes, and reveled in a period of intense spiritual creativity.

Heaven's Ditch by Jack Kelly illuminates the spiritual and political upheavals along this "psychic highway" from its opening in 1825 through 1844. "Wage slave" Sam Patch became America's first celebrity daredevil. William Miller envisioned the apocalypse. Farm boy Joseph Smith gave birth to Mormonism, a new and distinctly American religion. Along the way, the reader encounters America's very first "crime of the century," a treasure hunt, searing acts of violence, a visionary cross-dresser, and a panoply of fanatics, mystics, and hoaxers.

JACK KELLY is a journalist, novelist, and historian, whose books include Band of Giants, which received the DAR's History Award Medal. He has contributed to The Wall Street Journal, and other national periodicals, and is a New York Foundation for the Arts fellow. He has appeared on The History Channel and been interviewed on National Public Radio. He spent his childhood in a town in the canal corridor adjacent to Palmyra, Joseph Smith's home. He now lives in New York's Hudson Valley.

Posted by Friends of Schoharie Crossing at 12:34 PM No comments:

Originally published in our Autumn 2019 Newsletter, the story of the 1906 Broom Factory Strike and other labor actions are told on these two images.

As May is Labor History Month, we thought this might be of interest.

Amazing Storyteller Sandy Schuman presents a great blogpost titled:
Another Side To The Story: See the Erie Canal at the Movies

Posted by Friends of Schoharie Crossing at 5:03 PM No comments:

5 Ways to Spend Your Time at Schoharie Crossing

Maybe you’ve been here before, maybe you haven’t made it yet, or perhaps, you’ve never even heard of Schoharie Crossing?  Whatever the case may be, we’d like to offer up…

5 Ways to Spend Your Time at Schoharie Crossing

1. Exploring the History
There is so much history to explore at Schoharie Crossing! From the remains of the Erie Canal Aqueduct, to the footprint of the colonial Fort Hunter Blockhouse, and just the Mohawk and Schoharie Valleys! The site interprets the Erie Canal from concept to construction, enlargement, improvement, then canalizing the Mohawk River and even the present-day usage.  There is also interpretation on the British Colonial Fort first constructed in 1712 and the Mohawk village that was here too!
The trails at the site have signage to tell you more of the history and there is a great exhibit in the Visitor Center called, “Pathway to Empire: How the Erie Canal Helped Build America.” Group tours are available by reservation as well.
Want to know how to get to Schoharie Crossing? Visit this link! Schoharie Crossing Directions 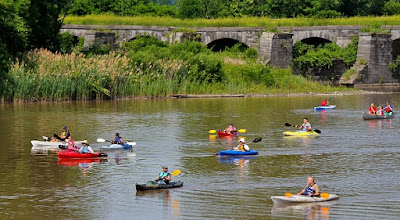 2. Fishing! Paddling!
Whether it is from along the banks of the Schoharie Creek or the Mohawk River, or maybe from a canoe, kayak or small motor watercraft, fishing from Schoharie Crossing is fun and easy! The west end of the site contains the Aqueduct Boat Launch area just off NYS-Rt 5s (Access across from Karen’s Ice Cream!) The launch has plenty of parting… also grill stations, picnic tables and a small playground.  The concrete ramp and floating dock make the transition off or on the trailer a breeze.
Launching a kayak or canoe is easy too! Either from the ramp, along the banks of the creek or perhaps another part of the site – like the east end at the Yankee Hill Lock access point. There is a floating dock and you can paddle out into the Erie Canal of today, the Mohawk River.   Explore Lock E12 -Tribes hill and Pepper & Upper Pepper Islands just to the west, or head east past Robb Island toward Lock E11 in Amsterdam.
If Paddling isn’t your thing, parking at Yankee Hill, the Aqueduct Boat Launch, and even right by the Visitor Center is easily accessible for cyclists wanting to ride the Erie Canalway Trail / Empire State Trail.

There are two great scenic spots on site that also have picnic tables and grilling stations, why not come visit with friends and family for a picnic!? Create memories that will last a lifetime as you recreate or just enjoy the views of natural and manmade beauty!  Take a stroll along the creek or river banks and share the splendor with loved ones.

4. Tuning Into Nature – Walking the Trails
The site offers several nature programs each year, but you don’t have to be a naturalist, bird, plant or wildlife expert to enjoy being outside! Come take a walk, paddle, or bike ride along the site and get tuned into the natural world around you.  Schoharie Crossing features over 3 miles of trails along old towpath routes from the Erie Canal, and the Friends of Schoharie Crossing have adopted a trail along the Mohawk River that connects Yankee Hill Lock to the Southside of Amsterdam – passing Lock E11 and onward to the Mohawk Valley Gateway Overlook Bridge.
Dozens of bird species, hundreds of varieties of plants and trees, as well as other small animals are all right here to be witnessed.  Studies have proven that time outdoors is good for the mind and the body! Get Your NatureRx Fix Right Here at Schoharie Crossing! Click here for a map of the site: Schoharie Crossing Map 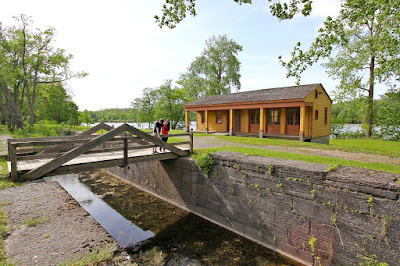 Natures beauty in the Mohawk Valley will be evident as you travel across the site or along the river.  Dozens of bird species, hundreds of varieties of plants and trees, as well as other small animals are all right here to be witnessed.  Studies have proven that time outdoors is good for the mind and the body! Get Your NatureRx Fix Right Here at Schoharie Crossing! Click here for a map of the site: Schoharie Crossing Map 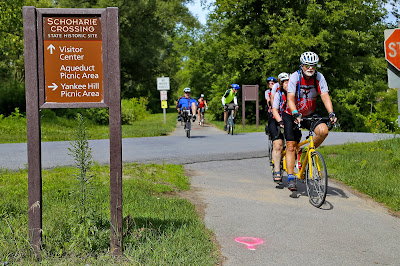 Schoharie Crossing also offered dozens of programs on site during the Visitor Season – from the end of April until the beginning of November.  There is a lot to do at the site, with sponsored events and programs ranging from storytelling for all ages (Not Just for Kids Storytelling series), live music jams (Putman Porch Music), guided nature walks, tours of the historic features, lecturers on various topics from history to nature to social interest stories, and so much more!  The site partners with several organizations to bring programs to the site or locally – with such series as the 15 Miles on the Erie Canal Paddle tours in Montgomery County, and outreach programs to schools, libraries, and other cultural institutions.  Find out more and to see a calendar of events, visit the NYS Parks website or like Schoharie Crossing on Facebook (Link Here!).
On site there are so many programs, opportunities to volunteer, and ways that you can help create bonds, memories, and a lasting impact for the future.  Groups, organizations, and families can also apply for special use permits for such things as fishing tournaments, re-unions, activities and more! To contact the site, visit the website: HERE

We hope you visit Schoharie Crossing and tell us what your favorite thing to do on site is! Leave comments below and let us know!

Posted by Friends of Schoharie Crossing at 8:33 AM No comments: