One of the wonderfully valuable resources that the internet allows us to have access to is the NYS Archives digital collection.  The collection can be accessed via the website: http://www.archives.nysed.gov/ and provides a great deal of terrific information and primary documents.  Primary documents are not just letters or essays from well know historical figures.  There are a myriad of valuable bits of information that can be gained from images, painting, schematics, and more! From those that were well to-do and those that sustained or eked the meager of existence – the story told should be that of the human tale toward progress, toward betterment, toward further enlightenment and equality.

We’d like to present a couple of the many fantastic maps in the digital collection of the Erie Canal.  These are in and of themselves works of art!  There is enough detail to illustration the functions of the features as well as some of the local geography but in a simple and artistic form.  We have found that many of the engineering illustrations as well as these maps contain a wonderful sense of art.

First, this map that “is an ink, wash and charcoal map of a section of the Erie Canal in Glen. It shows the Mohawk River, the Auries Kill which forms a large basin and dam, a stream, a floating bridge that spans the Auries Kill, five other bridges, thirty buildings and the Road to Florida. The red lines indicate … [more]courses and distances. The blue lines indicate canal right-of-way. The map also shows the properties of A.A. Lansing, P. Archibald and Saml. Jackson.” 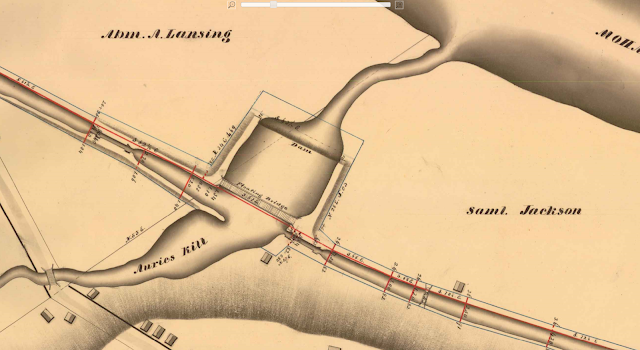 Let’s zoom in a bit.  We can see here the canal but also a floating bridge, the dam, several small bridges over the canal as well as the Auries Kill as water is used from auxiliary or lateral sources such as creeks to “feed” the canal system.  Here though we see an example of a means to divert water into but also excess water from that system.
The map also gives some indication to the topography.  Grey shading shows the elevation change from the flats along the Mohawk River to the rise up the valley walls.
Another great image is this one below of a section in Florida, NY that “… shows the Mohawk River, two islands, a gravel bank, a waste weir, three bridges and ten buildings. The red lines indicate courses and distances. The blue lines indicate canal right-of-way. The map also shows the … [more]properties of J. Enders, John E. Wample and E. Wample.”  This map also has a lot of great primary information that helps understand the construction, function and operation of the complicated system of the Erie Canal.


Let’s show a detail on this as well so that the features of the basin, waste weir and bridge can be examined: 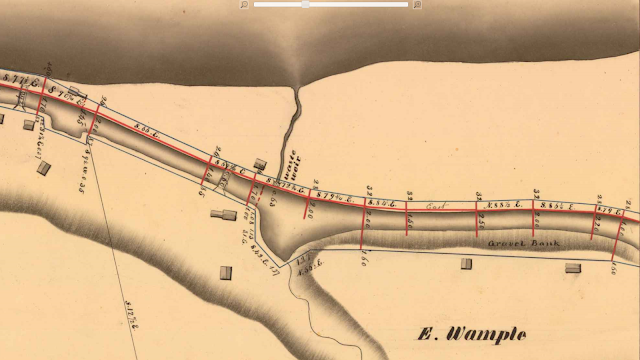 Note the bridge in the upper left of this image.  The basin is also present near there and allowed for barges to pull off either for traffic or other necessity – perhaps here the more likely reason would be the Wemple Canal Store*.  Center in this detail is the waste weir to cope with excess water on the canal and also flowing into the system from the small unlabeled stream.  Another great item to note is the “Gravel Bank” and exploration of other contemporary documents as well as the ledger for the canal store may make mention of the resources local land owners made available to other industries in the area.  However, this labeling of geographic resources is maintained throughout the mapping of the Erie Canal and at points where the soil is loose, rocky or extremely steep it is noted as a feature of that section.  This – it could be seen – is a way to determine other factors as to why or how construction and repairs would need to be addressed.

Additionally, notice in all of these images that the towpath is on the north side of the canal between it and the river. A section of the towpath at Schoharie Crossing is extremely close to the river and is nearly the only solid ground between the canal of today (on the river) and the vestiges of the Enlarged era Erie (1845-1916).  It was in this area that several breaks in the canal wall occurred between those years – the largest of which was over 200 feet long in 1904.

We encourage you to explore the Digital Collection at the New York State Archives and discover some of these great primary sources for yourself.  Also, the archives exist to be utilized – whether that is for personal enrichment or other professional research and can be accessed in person at Albany, NY.

Also, several more of these Erie Canal maps will be featured on Schoharie Crossing’s Official Facebook page for #MapMonday’s in the upcoming months.  “Like” them and keep up with them, their great events, #MapMonday’s, #WhatIsIt or #WhereIsIt Wednesdays, as well as #ThrowBackThursdays and more!!!