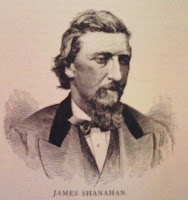 One of the really great things about Schoharie Crossing State Historic Site is that it is the only place where you can witness all three of the major phases of the Erie Canal - from “Clinton’s Ditch,” to the enlargements of the mid-19th century and to the “Barge Canal” of today.  To make today’s Erie even more fantastic along Schoharie Crossing, is the Lock E-12 operated by the New York State Canal Corporation between Tribes Hill and Fort Hunter.  This lock has a movable dam and is one of only two which also serve as an automobile bridge.  Lock 12 is known as the “James Shanahan Lock,” and for good reason.

James Shanahan was born in Ireland in 1829 and came to New York at the age of eight.  As a young man he began the trade of “a stone cutter,” and worked with his brother who was a contractor on building “lock 50 on the Erie Canal and locks 9 & 10 on the Oswego canal.”  His work continued with projects for the Erie Railroad, Central Railroad and the Oswego Railroad.  After such time, he was employed by the Dorchester Freestone Company in the capacity of quarry overseer.  Those under his supervision garnered great profits for the company.


The next step in his career was “engaged in the construction of the New York Central elevator” that spanned across the Hudson River at Albany.   After finishing the contract, Shanahan was elected in 1869 and served as a member of the New York State Assembly for Montgomery County.  In the following years he was employed in the projects of a new bridge over the Hudson that utilized cut stone from his Tribes Hill quarry, as well as the masonry work associated with the Central Railroad double track line between Fort Plain and Fink’s Bridge, also between Schenectady and Albany and the stone work for the Schenectady Bridge.


While most newspapers and accounts comment on the character of Shanahan as being good and as him being non-corrupted in an age of massive political underhandedness, at times there were misgivings as to his interests - particularly between the competitive canal system and the railroads.  Other mentions, while agreeing as to his honorable nature, make a point that often in his role of government official he was at odds with the public.  He was influential in not only county government but state as well, and that while patronage (particular canal related) was prevalent in Montgomery County, Shanahan exacted his functions of office without “working his department for all it was worth.”

In later years Shanahan sat on the boards and councils of several local and regional investments such as the Cayadutta Electric Railroad and the Fonda, Johnstown, Gloversville Railroad (F.,J., & G. RR) as well as continued in state politics - notable as part of the Democratic party and nominating committees.  His role within the Cleveland-Hill Feud was often recognized in the press, and while the Cleveland faction won in 1891, his resignation from the Public Works department brought fears of the Hill faction replacement.

On the home-front Shanahan had married in 1854 and produced eight offspring.  In 1875, along with several neighbors, he purchased the former Dutch Reformed Church building - “an unoccupied church, located on main st [in Tribes Hill]...which was enlarged, remodeled, tastily finished and furnished” that was “presented to the bishop of the diocese” as two priests were at that time shepherding a parish that encompassed Fort Hunter, Tribes Hill, Amsterdam and Port Jackson.

This would become Sacred Heart Church which has since rebuilt but retains a congregation in the town. The Catholic Church enterprise, along with several other real estate holdings and business investments placed Shanahan well within the leaders of civic life in the area. The divestment of his estate took place in January of 1900 after the passing of his widow.  James Shanahan had himself died on March 12th 1897 in Albany, NY.

The sale  of  the  James  Shanahan property took place at the Central hotel in Amsterdam Saturday.  The  bid­ding was quite lively and a  majority of the parcels  offered  brought fair prices.  Judge Westbrook  had  charge of  the sale, which  began at  10  o’clock  and lasted two hours.  The  first parcel offered was a  house and vacant lot  on McDonnell  street,  Amsterdam.  It was struck down to Francis Morris for $2-250.
Solomon  Levi bid  in a  Lot on John street for $26.50.
Francis Morris also secured the property on Forest avenue, a stone quarry, the price being $300.
The James Shanahan farm at Tribes Hill was struck off to Henry Dufell for $1,495.
John Noonan  bought  the  property south of the railroad at Tribes Hill for $150.
A house and lot at Tribes  Hill  was bid in for $262 by E. A. McCaffrey.
What is known as the broom factory property at Tribes Hill brought $60, the purchaser being David  H.  Lewis.
Much Interest was displayed  in  the bidding  for  the  farm in the  town  of Florida.  T. H. Benton Crane and Augustus Becker were the rival  bidders. It was struck down to the latter for $1,100.
The Crandall  house and lot was purchased by Elijah Smith for $400.
E. J. Shanahan secured what  is  also known as the Crandall  property at Tribes Hill.
The last parcel was the Kilcast property and was bid on by  James W. Ferguson for $70.
The  sale  aggregated $6,723.50.