Some may have heard in the past at Schoharie Crossing, we’ve discussed at times the connection of the Adirondack Park and the Erie Canal.  In fact the canal system is given some modicum of credit for the ultimate decision of the New York State legislature to create the forest preserve that has evolved into what we know today as the Adirondack Park.

As Philip G. Terrie mentions in his book Contested Terrain: A New History of the Nature and People of the Adirondacks, by mid-19th Century the Adirondack region was less densely populated as much of the rest of New York.  The growth of the populace in the state had been born by an immigrant influx in the early decades of the century that was in part an effect of the Erie and Champlain Canals.  Within what is now the Adirondack Park, the population was not so much increased and it remained mostly New England and New Yorker born according to census data.  In fact, within those years following the American Revolution from 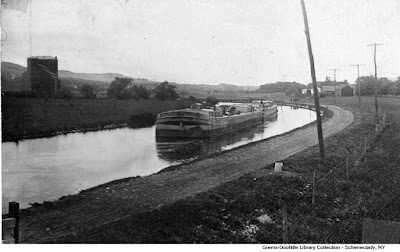 1785-1820 the Yankee Migration brought thousands of New England families into New York, spurred further after the construction of the Erie Canal, more migration filtered through the state after 1825.  Many families familiar with the rocky soils of New England mountains settled into valley regions of the Adirondacks.

Following the 1872 establishment of the Yellowstone National Park, a comprehensive survey of the mountainous region of northern New York was called for.  The surveyor, Verplanck Colvin would be given the task and often drive his crew to near mutiny in its execution.  The team traced the source of the Hudson River to a small pond on the side of New York’s tallest mountain – Mount Marcy.  Colvin’s 1874 report urged the creation of the Adirondack region into a park to the State Legislature.  In it he was to “show that the practical continuance of the canals, or their enlargement, for shipping purposes, whether it be the Erie, the Champlain, or the Black River, depends in the future, as it does almost entirely at present on the numerous rivers of the wilderness…”  To continue economic growth and prosperity, the region must be protected as “destruction [of] vast forest which covers from three to five thousand square miles of Northern New York…” would also destroy the resource of the geological advantages the state possessed and benefited greatly from.  In Paul Schneider’s work, The Adirondacks: A History of America’s First Wildness he covers this concept in exploring the origins of the Park within the larger context of the exploitation of the Adirondack region’s resources.

Schneider discusses the impact that the logging and mining industries in particular had on the ecological systems of the state. Tax defaulting and land skipping schemes were the normal modes of operation for logging companies at that time; while mining operations not only stripped mountains of minerals and metals but also of their timber in order to make charcoal for smelting ore.  Companies would buy land – often at tax sale – then strip them of their resources quickly before they defaulted on taxes without a single payment.  By the late 1800’s an area of nearly 1.75 million acres had felt the full wrath of industrialized man.  These acres that Colvin had surveyed were again recommended to be protected as a refuge and on May 15th 1885, Governor David Hill signed the first legislative action in a two part series that would establish the Forest Preserve to “be forever as wild forest lands.”  More consolidating and structure would be needed to secure the watershed of the Mohawk and Hudson Rivers.

New York State had begun the practice of acquiring land in the Adirondack region by the 1870’s, foremost to stem the tide of corrupt company practices of tax defaulting on lands just to pick them up at a cheaper price while profiting greatly from the timber.  From 1872 to 1884 the State lands grew from 40,000 acres to 700,000 acres.  As Philip G. Terrie points out, the years between 1825 and the 1860’s –fueled by the canal system and railroads- brought an era of travelers, tourists and shifting settlements of populations across the state as well as nation.  The Adirondacks saw a new class of traveler into the region, but with the movement of people there was also the movement of ideas, culture and innovation.  Early logging of the virgin Adirondack forest was mostly for particular species of trees such as pine for lumber or hemlock for tanning.  By the later decades of the 19th century a chemical process to create pulp from timber transformed the approach to felling trees and along with a swell in the paper industry the region saw greater devastation as selective logging became a process of the past.  Every tree could be utilized now for either pulp or to be turned into charcoal for the iron industry.  Much of the eastern Adirondacks suffered the worse of this methodology – directly affecting the water levels of the Hudson and eastern section of the Erie Canal. 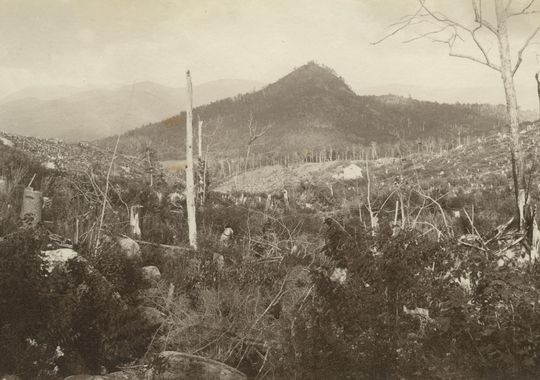 George Perkins Marsh published Man and Nature; or, Physical Geography as Modified by Human Action in 1864 outlining the impact on what we would call the ecosystem of the Mediterranean region due to the abuse of its resources, the felling of its timber and transformation of its landscape.  In particular Marsh called out the deforestation as direct cause to the climate change of the region.  Decades later and half way around the world, it seemed the very same was occurring in New York.  The healthy forested mountains that once retained moisture from rain and melting snow were now gasping wastelands.

The Adirondack region, prior to the 1870’s had, despite the logging and mining, remained healthy enough to provide the gradual release of water into the overall system of creeks, streams and rivers.  A series of devastating wildfires during seasons of drought in the later portion of the decade fueled by the brush and bark remains of logging, added to the overall apocalyptic landscape. With millions of acres of tree’s now gone, “the runoff occur[ed] rapidly, [causing]…alternating flood and drought.” 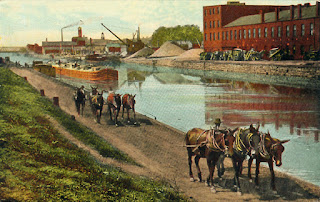 It was then that the “transportation interested feared…such a disruption” as the viability of the waterway came into serious consideration.  By 1892, pressure from early preservationists, fire insurance companies, shipping interests and hydro-powered mill companies achieved pressuring the stagnant New York State Legislature to approve greater protection of the Adirondack region.  Governor Roswell P. Flower signed an act that provided increased protection of 2.8 million acres within the Blue Line.  The park was to “be forever reserved, maintained and cared for as ground open for the free use of all the people for their health and pleasure, and as forested lands necessary to the preservation of the headwaters of the chief rivers of the state…”* - and in the case of the Erie Canal, an artificial river as much as any other.

Just two years later New York State was in the process of writing a revised State Constitution.  Years of drought, forest fires and advocacy from wealthy industrialists fearing economic shortages caused by decreased shipping on low rivers meant the insertion of Article 7 Section 7 that banned lumber harvesting to protect the future of the Empire State.

Are you a member of Meetup.com? There's a great meet up planned for Saturday, July 9th to paddle the Schoharie Creek &...