The broom factory was built about 1876 by Ebenezer Howard.[1]  Howard was a local farmer who had previously been in business in as a broom maker with John D. Blood under the firm name of Blood and Howard.[2]  In the new factory, Howard operated the American Broom and Brush Company which apparently specialized in deck brooms for use of boats on the nearby .[3]

The business passed from Ebenezer Howard to his son Charles L. Howard, who in  about 1901 moved it to Port Jackson.[4]  Here he reputedly built the largest broom factory in the world.[5]  Howard continued to reside in and was listed in the Amsterdam Directory as President of the American Broom and Brush Company until at least 1929.[6]  After that he appeared as President of the Farmer’s National Bank of , until about 1940 when his name disappeared completely.[7]
When the Howard firm left , the factory building was sold to Fred C. and Charles Wittemier.  They conducted a broom making business under the name Wittemier’s Sons.[8]  Sometime during the Wittemier’s ownership the factory was converted from steam power to electricity.[9] 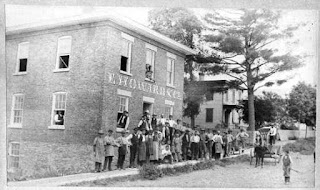 About 1917, the Wittemier’s sold the factory to Fred W. Bohney of .[10]  Bohney, who in 1905 was a grocer with a store at ,[11] had later operated the Premier Broom and Brush Company in that city.  When his establishment was burned out, he moved to the factory in .[12]
By 1940, ownership of the Premier Brush and Broom Company had passed to Fred H. Miller.[13]  Miller was reputedly a brother-in-law of Bohney’s nephew.[14]  Under Miller’s management, the factory made primarily brush brooms.  The firm held contracts with Grant’s and Kress’s chain stores and made brooms to order for various department stores and railroad companies.[15]  By 1952, however, business was sliding and the building needed a new boiler.  James E. Downing, a former employee, negotiated the purchase of the buildings with all the equipment except that specifically exempted by Miller.  As soon as the sale was completed, Downing closed down the business[16]
Soon after, the machinery was sold to D.W. Swindle of   Much of the machinery from was old-fashioned, foot-powered machinery and was especially useful in Swindle’s factory which employed a number of blind people.[17]
For several years Downing used the main floor of the factory buildings for his cabinet shop and stored antiques upstairs.  Windows were constantly being broken and security was a problem, so eventually he moved his things out and abandoned the structure.[18]
The broom factory was the smaller of two located in the village of .  The other, on , has now been demolished.  A county atlas of 1905, shows  this factory was operated at that time by Hartley Brothers.[19] In the early years of this century, the majority of wage earners in the Hunter earned their livelihood in this broom making industry.[20]

*This History of the Fort Hunter Broom Factory is part of the preservation report completed in 1974 for the Historic Preservation Office on behalf of Schoharie Crossing State Historic Site.  The complete draft is on record in the collection of the site as well as NYSOPRHP.