Empire in all its Glory

Empire in all its Glory
By: Jenny Galough

Let’s think about the last time you visited Schoharie Crossing in Fort Hunter, NY (if you haven’t, it might be time you do). Now, let’s reminisce and think about what you took away from your visit… Chances are, your memory (or knowledge) went straight to Empire Lock #29 and rightly so. 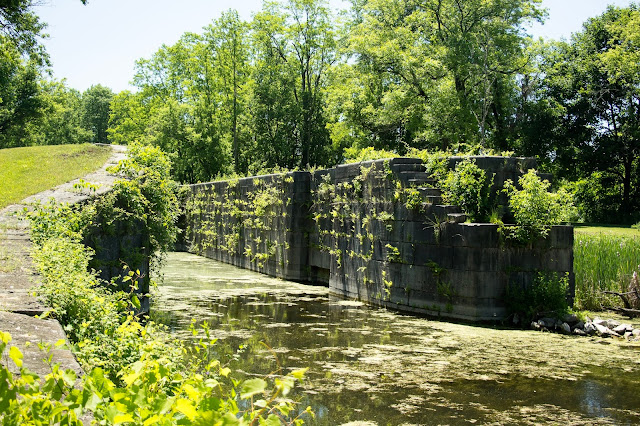 Empire, constructed between 1838 and 1845, by Contractor James C. Ott, is one of the enlarged locks within the Erie Canal. It has two side by side chambers which allowed for two barges to utilize the lock simultaneously, and thus not causing an extended wait time for passing.  Expanded in the late 1880’s, this lock is 110’ x 90’ compared to the original 90’ x 15’.  In the center of the photo, you will notice an indent in the structure.  This is where the massive wooden lock gate would have been situated. At the Eastern end of the wall you can see the stairs where boatmen could either leave or gain access to the barges. 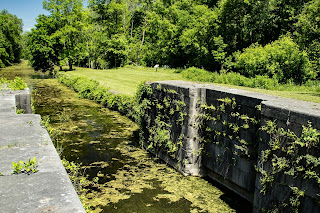 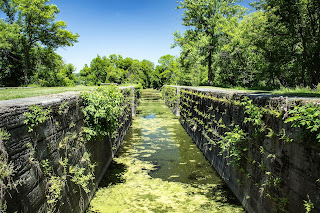 The photo above better depicts the indentation in the wall where the gates would have been, in the background, you can also get a glimpse of the remains of Lock 20 from the original 1820's canal. This location is the only one in New York State where you can experience the Enlarged Canal adjacent to the Original Canal. Photo right, is an Eastern view of the elongated portion of Empire Lock. 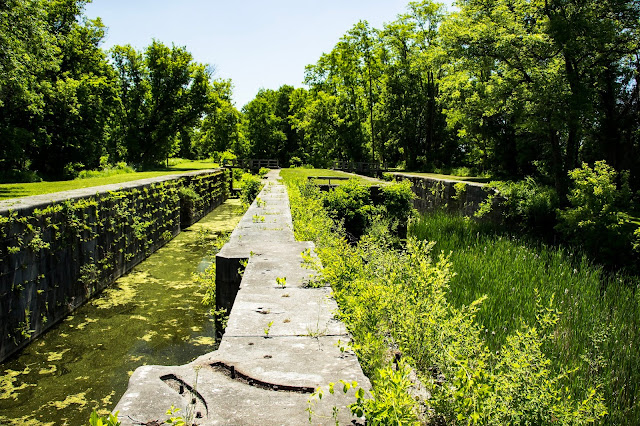 This western view of side by side chambers show the length variation between the orginal enlarged and the elongated enlarged chamber. This view makes it quite obvious that a whole second barge could fit in the east bound chamber without a problem. The west bound chamber showcases another set of access stairs as well as a contractor’s plate which identifies Ott as the builder.

Empire Lock Number 29 is one of the 73 locks along the enlarged Erie Canal which spanned over 300 miles across New York State. Groundbreaking for the original canal was in Rome, NY on July 4, 1817, and construction commenced both east and west toward Albany and Buffalo. In 2000, Congress designated the Canal part of the Erie Canalway National Heritage Corridor. Schoharie Crossing State Historic Site is the only location along the canal where all three of the major phases can be witnessed.