Autos on the Towpath 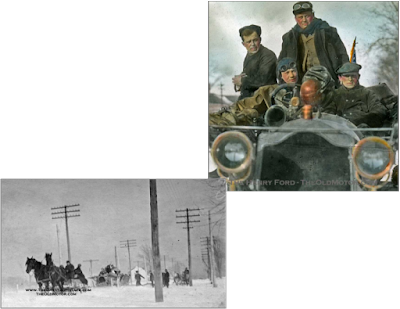 It seems an odd thought, that the Erie Canal Towpath played a role in the famed 1908 New York to Paris Auto Race.  That race started in New York City with six cars from  four nations: Germany, France, Italy, and the United States.  Mr. David McBurnie, a member of The Friends of Schoharie Crossing, brought to the site an article in the November 2015 edition of Hemmings Classic Car magazine in which it mentions that after “[t]he race got underway as a blizzard was whipping the Northeast...Outside the New York City, the roads ended.  Mules pulled the Thomas to Buffalo along the Erie Canal towpath.”  Thomas was a Buffalo, NY auto builder and the company’s “Flyer” was the American vehicle competing in the race.


Those six cars started the race at 11: 15am on February 12th in Times Square, New York City.   The French fielded three autos; Sizaire-Naudin, Moto-Bloc & the De Dion.  The Italian car, Zust and the German, Protos, rounded out the competitors along with the Thomas Flyer. 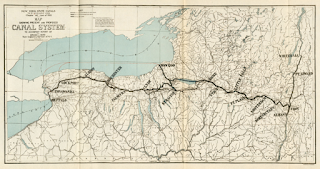 What roads existed in America were generally terrible at the time and in the northeast in particularly during the winter months they were often not maintained and therefore covered in snow for sleigh travel.  This was something every team of autos would have to contend with just as much if not more than defeating the other cars.  E.E. Schwarzkopf wrote in 1908 in the weekly publication Automobile Topics that, “All along the route inhabitants have turned out to cheer and encourage, in the country districts, to break roads, shovel cars out of drifts and...aid in the progress…” of the historic race.  According to the article, that process started almost from the outset as the cars had traveled only around 116 miles north along the Hudson River on the first day.  They were besieged by snow, ice and mud and it would continue that way nearly the entire length of the continent.
By the evening of the second day, the lead cars Flyer and Zust had arrived in Fonda with the De Dion stopping in Amsterdam.  They battled snowdrifts north then west from the town of Hudson.  From Fonda these cars navigated west with relative ease along the towpath of the Erie Canal.  Before arriving in Fonda, each car had experienced long delays of digging tracks or filling ditches from Albany and Schenectady—where “three hours were wasted trying to find a road to leave the town.” 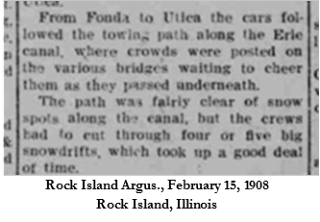 By Friday the 14th, the lead cars had made it to Canastota along the route of the canal.  All across the state people flocked—not only to help dig through drifts but also to witness the cars on their incredible journey.  Spectators crowded and cheered from canal bridges in every town.
The harsh conditions and need to cut through the snow meant the teams had a real reluctance to be the lead auto—as each machine with that task were strained constantly.  At one point the crews had to clear some 80 logs as well as a stage road that was being used to haul ice harvested out of the canal.  Surprisingly the crews of each team worked together for this purpose. 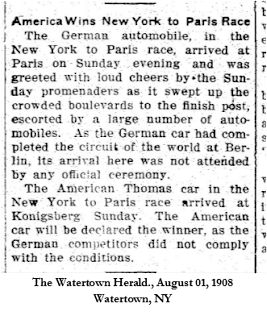 Some of the worst travel was through the Montezuma swamp area between Syracuse and Rochester on the fourth day of the race.  Heavy rains turned even the graded and well packed towpath into a muddy mess.  From Syracuse to Auburn the main road was traveled instead, as each of the autos still in the race pulled off the towpath.  The Flyer and the Zust lead this stretch despite areas with mud twelve inches deep and a three hour delay in the swamp.  Having been stuck for some time, eventually the autos were freed from the mud by hired horse teams.  By Sunday evening the cars had made it to Buffalo, where the rain ceased and repairs could be made.  Temperatures dropped and the mud froze solid, much to the delight of the crews.
The city of Buffalo welcomed the cars and their crews with more than 5,000 spectators and a mounted police force who threaten to arrest them for disturbing the Sabbath.  After an evening of being special guests at various dinners and events, the crews headed out in the darkness of the next morning on their way toward Toledo, Ohio and the rest of their epic journey around the world. 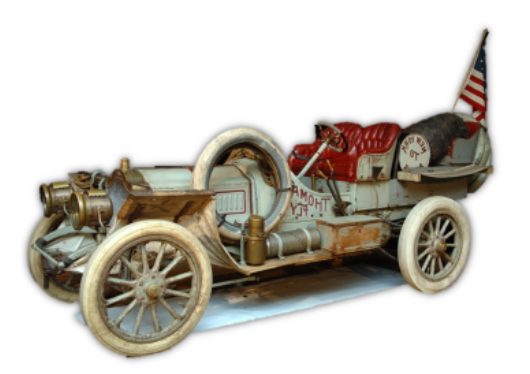 *This article originally appeared in the Autumn 2015 Friends of Schoharie Crossing Newsletter.  It was also published as part of that newsletter on this blog.