The Revolution Of The Tread Wheel

The Revolution Of The Tread Wheel
Contributed by: D. Brooks 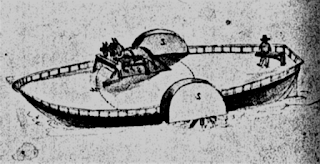 The use of simple machines has been advantageous for mankind for thousands of years, even if in their early forms their scientific value may not have been fully explored nor even understood.  From childhood we are taught that the invention of the wheel revolutionized humanity.  What constitutes an improvement is how that wheel is employed, by what power it is operated and the result it provides.
The Romans used the wheel as a way to build an empire, very literally.  Not only should the image of chariots come to mind but the tread wheel crane they developed for construction.  And later similar cranes using human or animal power were used to lift cargo and unload barrels from canal barges in such places as Bruges, Belgium.
A tread wheel is quite simply a wheel that is turned by threading upon it.  Paddles or steps would often be featured in the design for the foot of a human, along with a stationary handle to maintain balance.  With each tread, or step, the wheel would turn by the force of leg power.  This concept may be most familiar in the modified electric design of a treadmill in use today for everyone still sticking to their New Year’s Resolutions.  The principle remains the same and quite simple: by an exertion of force it can convert that into torque or leverage to apply in a different manner.  Most often this was done around a horizontal axis to supply power to drive belts for machinery such as pumps, lathes and mills.
By the early 19th century, the wheel had already been applied to boats as a means of propulsion, though increasingly the axis was attached to another machine such as a steam engine.  The use of tread wheels however, was still explored for use on smaller vessels, particularly on the canals of Europe. As evidenced by the patents being awarded in England at the time, the scientific design and redesign of this genius of Archimedes was in full gear.
In January of 1821 Charles Phillips received a patent in England for a design that used cogs, levers and an inclined plane to apparently accomplish movement of the paddles which "folded" as they rounded the wheel [1]. Further down in this publication is Frederick Mighels Van Heythuysen's patent for his version of the tread wheel - No.4572 on July 23rd 1821.  Which is notable for the fact that there is a specific purpose mentioned, which was for use on canal barges to reduce the need for equestrian power. 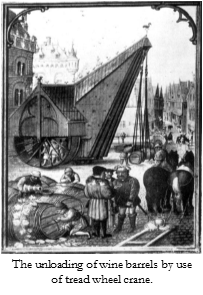 This patent summary states that the treading axletree would affix to a vessel in such a way “that the heels of the right or left feet may alternately tread.”  On the ends of this axle would be a number of fixed paddles upon a wheel that would “project over the side of a vessel” [2]. In The New Monthly Magazine & Literary Journal Vol. VI [3] published in 1822 by London printer Henry Colburn & Co. explains in some detail the mechanics of Van Heythuysen’s device as well as the force two men could exert – accounting for friction.  It also describes the ease at which this contraption could be “taken off a vessel in a moment, and so light that a man can walk away with it with as much ease as he can with a pair of oars.”  The journal then explains that two men could use the tread wheel to “propel a canal barge…at the rate of five miles an hour” and thus reduce any need to maintain a roadway alongside the canal for horses, nor would there be a need to employ horses to pull barges.


It may come as no startling surprise that this device did not make its way into popular use in America, particularly on the Erie Canal.  For starters it may be mentioned the shear risk of a device so easily “lifted” from its rightful place, as well as the need for it to be removed for each lock as it created a barge width far wider than the chambers.  Another setback would be the rate of pay for employment of two men paddling, and then factoring in the need for several pairs of treaders to operate on the canal for any length of distance or duration of time, the cost is exorbitant. 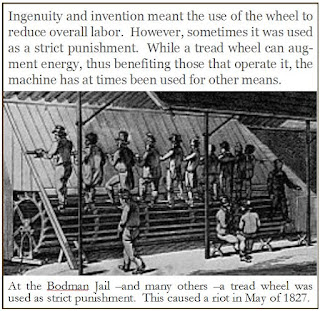 Another improvement that could have seen more use, though there seems little record of it, was an ingenious adaption by a Mr. Langdon of Troy, NY.  The Geneva Gazette very briefly describes his improvement, by which “horses are placed on each side of the boat, stationary, and tread upon a horizontal wheel, which propels another to which the paddles are affixed” [4].  Langdon and his son were apparently quite the inventors and are also recognized years later by the NYS Agricultural Society for their improvements to cultivator plows as well as the development of improved horse powered ferries using the method descripted in the Gazette [5].
These are tremendous improvements utilizing the wheel for the transportation of people and goods on water.  However, there is another good reason that they may have never seen adaption on the Erie Canal – erosion.  The churning created by the paddles of a wheel would have created churning wakes that could lead to the erosion of the canal berms and cause breaks that would wreak havoc on the system.  If that concern were remedied, it can also be said that use of the tread wheel paddle on a wide spread scale could have eroded the economic system that surrounded the canal itself, leaving path masters and crews without the task of monitoring and repairing miles of towpaths.  The farmers and companies that earned a living by care and feeding of mules and horses would have seen a great loss in profitability as well.  The loss of maintained towpaths would have also affected communities along the canal, as they were used for connecting those towns and cities in ways even beyond the barges in the water as a roadway for many individuals and families.

*This article originally appeared in our Winter 2017 Friends of Schoharie Crossing Newsletter.

Take a look back at our Newsletters from 2018 by clicking this link here:
www.friendsofschohariecrossing.blogspot.com