Quickly having to change the way programs are offered at the site, Schoharie Crossing staff began providing presentations and other interpretation “virtually” when COVID-19 forced closures and quarantines.  While NY State was on PAUSE, the site began to press play on giving programs through WebEx and uploading videos to Facebook as well as YouTube.

Schoharie Crossing’s small staff began brainstorming ways to engage with the public when unable to do it face to face. David worked on videos that highlighted some of the major Erie Canal features that the site has, and also developed new exciting presentations about Otis Eddy, the Schoharie Creek Dams and more.  Kalli began working on Digital Escape Rooms and updating youngster programs.  Reaching out to other museums and Erie Canal sites was a way to collaborate during this time as well.

Using the online video conference and meeting platform WebEx, Schoharie Crossing began a weekly offering of programs that covered the history of the canal as well as specific information about the features people can witness while visiting.  With one, usually notable exception—the dams of the Schoharie Creek.  However, because of the delay in lowering the Mohawk River dams for the modern canal, the creek waters were very low until the end of July.  This provided a perfect opportunity to speak about and show the dam remnants.  Similarly, since more of the Aqueduct remains were visible a program about the construction of that marvelous structure also was offered.  Both of those programs were also provided as a video “mash-up” for the 125th Anniversary Celebration of the Jervis Public Library in Rome, NY.  John B. Jervis became an engineer during the construction of the original canal and was one of those that eventually designed the enlargement era Schoharie Creek Aqueduct.

Collaborating with the Erie Canal Museum in Syracuse, the site provided a “program swap” that brought Baseball and the Environment to those that tuned in for the two online presentations or have been able to watch the  videos on YouTube.  Another “swap” series was had with the Fulton County Historical Society and Fulton County Museum which were all very well attended by folks tuning in live from home or watching later on social media.

Kalli also was able to do research for online “escape rooms,” which are games that use puzzles or observation questions to move through and escape by finding the “door out.”  The site offered a few of these and are currently revamping them so they can be offered for school programming as the puzzles and questions use historic interpretation and collections materials.  One of the projects involved an on-site exploration of the Erie Canal Museum.

Other great programs brought in author Jack Kelly for a Q&A session after the “virtual” book club reading of his 2017 book, “Heaven’s Ditch: God, Gold, and Murder on the Erie Canal” and the site hosted Bill Merchant from the D&H Canal Museum as well as the Historic Sites Bureau’s own Lavada Nahon, who spoke about food in  early New York. Chris Leonard, the Schenectady Historian gave a great and rowdy program on the Erie Canal through that city as a Gateway to the West.

While it has been disappointing to not have on-site programs this year.  These presentations still offer a live and engaging experience through online technology—with the added bonus that several have also been made available to view later on social media.  Even when in person    programming can begin again, using the ability to provide the content far and wide, to record it, and to keep it archived for the future is a very sound idea. 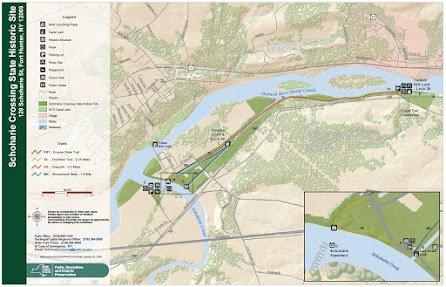 The competition was fierce, the images spectacular! But after hours of evaluating 435 images, our judges selected...