Check out one of our #FieldTripFridays and see the list below of programs!

From the Visitor Center

Join us for a free walking tour* at Schoharie Crossing along the historic towpaths of the Erie Canal. We'll be celebrating NYS History Month, discussing the construction of the canal and our great pre-canal history as well.

COVID protocols apply when not able to socially distance.

“The Ballads of the Schoharie Creek Drownings, a Series of UnfortunateEvents.”

In the 1970’s Ken Jones came across two poems that had been donated to the Esperance Historical Society entitled “Two Poems by J. & A.” The story they told was of a disaster that occurred to the Newkirk Family of the Town of Florida who lived along the Schoharie Creek south of Fort Hunter where the creek empties into the Mohawk River and feeds the Erie Canal. Many years after reading the two poems Jones was astonished to see an original broadside of the “Two Poems” on eBay and was outbid in an attempt to acquire it. Later, he acquired a copy through the State Library Manuscripts and Special Collections department and while researching this broadside, uncovered a series of unfortunate events.

“Who is Saint Isaac Joques? And Why Does He Matter?”

Historian Sean Kelleher will explore how in this region of spectacular natural landscapes became the central scene in the 17th Century for the life and martyr of Saint Isaac Joques.  Joques's life inspired many people, including pilgrims to discover, honor, celebrate, and share the heritage and stories of this region.

This program covers the service of the 115 NYS Vol. Regiment during the American Civil War.  Journey along with them from Upstate NY to the Deep South and back.  Discover the battles they faced on the front line and those experienced from within.

“The Wild Women of Rensselaer County”

Join Rensselaer County & Troy City Historian Kathy Sheehan for this illustrated lecture on the Wild Women of Rensselaer County.  Suffrage, anti-suffrage, education, labor and temperance are but a few of the historic subjects associated with famous women like Emma Willard and not so famous women like Julia Blanche Stover Clum and Evanetta Hare. These "wild women" made an impact on our county, state and nation and their legacy is still in evidence today.

“Mohawks and the Dutch in the Mohawk Valley”

This talk takes a close look at relations between the Mohawk People and the Dutch settlers who arrived at their borders in the early 1600’s. Focusing on experiences in the Mohawk  Valley, it looks at Mohawk and Dutch trade relations, their alliance in war and peacemaking, some family connections and other lasting impacts of their partnership. We will also discuss the ongoing legacy of those relations beyond the end of the Dutch colonial era, and the Mohawks’ return to the Valley today.

Paul Gorgen is a writer and researcher from the Mohawk Valley. Recently retired from IBM, he is currently writing about Colonial and Indigenous history in the Valley, drawing on his own family history back to the Mohawk people and the early Dutch and German immigrants to the region.  He is studying the Mohawk Language and serves on the board of directors at Kanatsiohareke Mohawk Community in Fonda NY, currently as board Secretary. Recent publications include several articles on the Mohawks and the Palatine Germans, including one in Plotzlich Da, a book on German emigration history published by the Deutches Auswanderhaus Museum in Bremerhaven, Germany.  His article on Clarissa Putman and Molly Brant appeared in the journal Iroquoia in 2017, and his paper on Mohawk relations with the Dutch in the Mohawk Valley, the subject of this talk, was published this year as a chapter in the book Dutch and Indigenous Communities in Seventeenth-Century Northeastern North America by SUNY Press.

Examining the 1929 Sesquicentennial of the Sullivan Clinton Campaign”

Join Mary Alexander, Curator of Education at the Arkell Museum at Canajoharie as she discusses the 1929 sesquicentennial celebration of the Sullivan Clinton Campaign.

The Sullivan Clinton Campaign was a major Revolutionary War event in which thousands of troops were sent by General George Washington to central and western New York. The troops were sent with the express purpose of wiping out the villages, homes, and crops of the Haudenosaunee "Iroquois" Confederacy. This scorched earth campaign wrought havoc on the land and people; complicating an already difficult set of circumstances in the region.

We will examine how the original historical event was viewed 150 years later, in 1929, when the Village of Canajoharie, and much of central and western New York, set about on a series of commemorations of the military event. To better understand this, we will look at materials from the Arkell Museum and Canajoharie Library's permanent collection including artwork, newspaper articles, and photography.

We will look at the legacy of the 150th celebration and the impact of this celebration - that is still visible throughout the built landscape of our region.

From the Visitor Center

Wrap up NYS History Month with Katy from Schoharie Crossing. She will lead a bike ride along the historic towpath along "Clinton's Ditch" and then the enlarged canal from the Visitor Center to Yankee Hill Lock, with a return on the Empire State Trail.

Ride will include 3 miles on grass towpath and 2 miles on paved biketrail. That's 5 miles to add to your Canalway Challenge goal!

While the grass towpath is well maintained and mostly flat, there are sections that include bumps and small ups or downs. We recommend a mountain bike or road bike with tires for such terrain. Narrow wheels and slicks will make this trek not so much fun. Please dress for the weather and bring an appropriate bike so that you are comfortable enough to enjoy this tour with us!

COVID protocols apply when not able to socially distance. 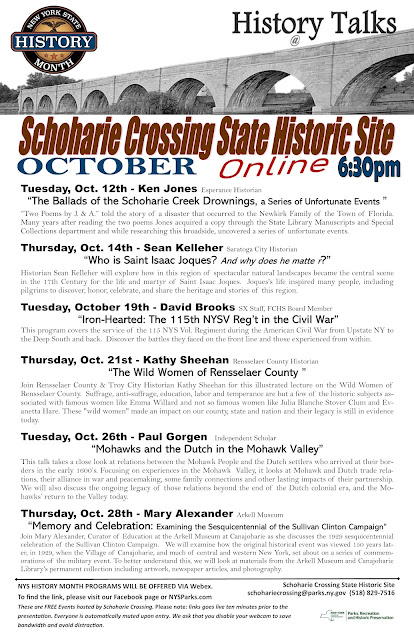