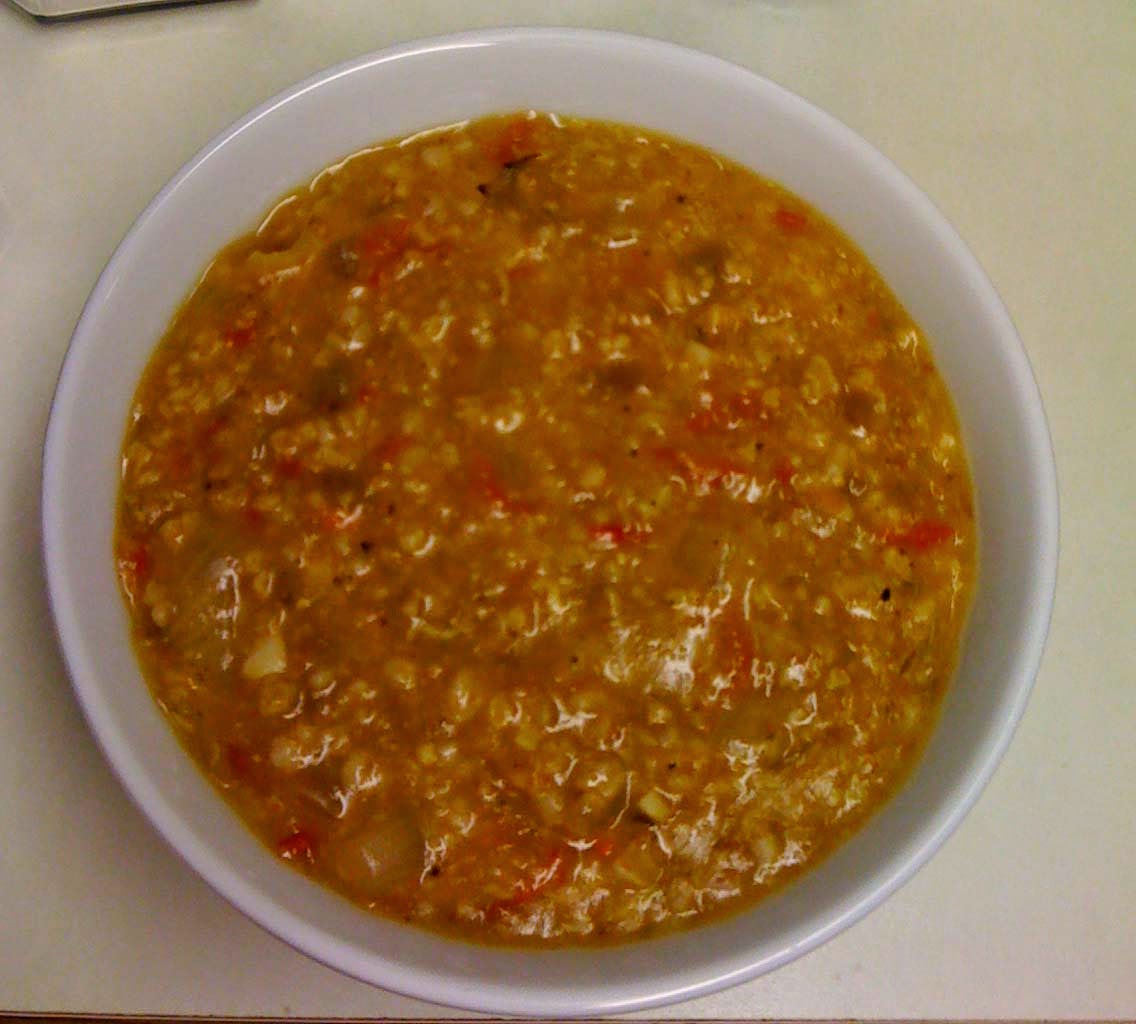 1.       Heat a large deep skillet or Dutch oven over medium-low, heat olive oil.  Add the oats; cook & stir them until toasted.
2.       In a blender or large food processor, combine the tomatoes, onion, garlic, 1 C of water, & cilantro. Blend until smooth (or leave a little chunk – that’s how we do), then pour that into the pan w/ the toasted oats.
3.       Slowly stir in the remaining 2 C of water, & bring to a boil. Mix in the salt & low sodium chicken bouillon. Cover, & simmer for 20 minutes. Enjoy hot or warm.

Ottis Eddy Oatmeal Soup - Garnish can be anything you wish; often a sprig of celery leaf and a sprinkle of parmesan cheese, or fresh herbs goes extremely well.    We have heard some enjoy adding some form of meat to this meal – particularly sausage.
As always, we suggest local products to make these recipes.  Not only will it keep money local, but local produce and shopping local is nutritious community building.

While the overall usage of the Oat grain has varied in the last several centuries, it has been a mainstay for feeding of animals as well as humans in general.  Used most often for animal feed, it provides additional carbohydrate energy.  Consumption by humans is often as a cereal* or within baked goods.

But what is an oat?

The oat (Avena sativa), is a species of cereal grain that is grown for its seed.  Oats are an annual plant, and can be planted either the fall (for late summer harvest) or in the spring (for early autumn harvest). The wild ancestor of the common oat, is the hexaploid wild oat A. sterilis.  Evidence in genetics shows the ancestral forms of A. sterilis grew in the Fertile Crescent of the Near East – present day area of Iraq. Domesticated oats appear relatively late, and far from the Near East; interestingly in Bronze Age Europe. Oats, are typically considered a secondary crop since they are derived from a weed of the primary cereal domesticates wheat and barley. In time as these cereals spread westward into cooler and wetter climates, this may have favored the oat weed, leading to its eventual domestication.

Today, Oats are generally considered to be a "healthy" food, and are touted as nutritious.  Oft cited is their property of a cholesterol-lowering effect and has led to an overall acceptance of them as a health food.  With anything however, moderation is key.  Due to their carbohydrate content, they provide a good source of energy – but be sure to use it!
This property, along with an array of nutrients and protein, give the oat a well-deserved good name.

Historical harvest methods involved cutting with a scythe or sickle, and threshing under the feet of cattle. Late 19th- and early 20th-century harvesting was performed using a binder. Oats were gathered into shocks, and then collected and run through a stationary threshing machine.

Today, harvesting of the grain is varied based on technology as well as technique.    For farmers seeking the highest yield from their crops, timing their harvest is essential.  When the kernels have reached 35% moisture, or when the greenest kernels are just turning to a cream-color they are then harvested by swathing (cutting the plants at about 4” above the ground. The crop is then allowed to dry in the sun for several days. The straw can then be baled.  Also, oats can be left standing until completely as this causes greater field losses (as the grain falls from the heads), and to harvesting losses, as the grain is threshed out.

Through threshing methods and then the milling process there are a number of oat products utilized today for human consumption.  Livestock aside, the rates of oat used to sustain life has increased in recent decades in various forms.
For us humans, the typical forms are rolled or in a flour.  Rolled oats are a result of flaking the grain through wheels or rolls.  This rolled oat is most typically associated with cereal products such as oatmeal and granola or in baking of cookies, etc.  The size of the flake can vary depending on the process and desired result.
Another form is flour; processing the grain directly through a hammer or stone mill.  Using a system of screens after pulverizing the grain, consistency in the product is determined by how fine the grain is milled into flour.  This flour is often used in breads.

It is little wonder that there is a specific month of the Oat - Recognition for its healthy support of human life – either as a food product for us or as fodder for livestock and fuel for draft animals.  Life along the canal would not have been as successful if it was not for the oat.  It provided energy to the horses and mules as well as a livelihood for farmers throughout the Mohawk Valley.  Oats were (as they are now) a commodity – canal stores and investors in New York profited from their harvest and most of all their demand.  Crop yields were noteworthy, and a source of pride for local farmers.  The humble oat should be viewed as the grain that tamed the continent.

*Sometimes oats are used in drinks.  They are sometimes used for brewing beer – particularly in Britain. Oatmeal stout is a variety that is brewed using a percentage of oats in the wort.  Also, a cold, sweet drink called avena made of ground oats and milk is popular as a refreshing beverage throughout Latin America. Oatmeal caudle, which is made of ale and oatmeal with spices, was a traditional British drink and reportedly a favorite of the notorious Oliver Cromwell.