Some of the really truly interesting aspects of Schoharie Crossing are the little details.  Many of the visitors to Yankee Hill Lock with the Putman Canal Store notice and enjoy the mural depicting what might have been on the shelves of that lock grocery between the mid-19th Century and the early 20th Century.  It may be surprising to some, but those items are historically accurate and researched specifically for the purpose of supplying the artist details from which to work.  Of course there’s a bit of fun in there, with the bees, cat and more (take a few minutes next you are there to look for them).

Let’s take a look at one of those items depicted in the mural, Dr. J. Hostetter’s Stomach Bitters.

Stomach Bitters and other nostrum remedies permeated the market along the Erie Canal and across the growing country in those years, particularly during the decades from 1850-1920.  These bitters were developed by a Lancaster, Pennsylvania practitioner by the name of Dr. Jacob Hostetter and developed into a larger scale production by his son beginning in 1853.

Originally the secret home-brewed tonic was prescribed by Dr. Hostetter to his patients for stomach ailments of all kinds.  This “medicinal tonic” was eventually marketed as “…a positive protective against the fatal maladies…”     That… is quite the statement.

The Doctors’ recipe called for a combination of 47% alcohol that was sweetened along with aromatic oils from anise, coriander, etc. as well as vegetable bitters such as cinchona and gentian.  Vegetable bitters provided the medicinal flavor – sort’ve the proof it was something more than just 94 proof whiskey.  That was something that helped the Stomach Bitters of Hostetter’s and many others to survive through the Temperance Movement of the mid to late 1800’s.  In an era of increasing local and state prohibition laws on alcohol sales these “remedies” grew in demand but the insist from Hostetter’s was that it was the herbal compounds that were vital to the potency of the bitters and required the alcohol to “preserve the medicinal properties.” 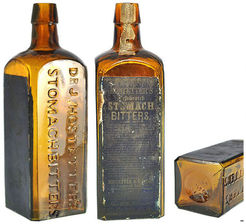 The large size bottle illustrated in the mural at the Putman Canal Store was one of the large size bottles from circa 1860-1865.  It features a dark amber color, is square and is approx. 9’ in height.  These large bottles were distributed until around the start of 1865 when the company – now Hostetter & Smith – announced that they would only distribute in a smaller 20oz. bottle.  The popularity of Dr. Hostetter’s Stomach Bitters continued to rise during this era with a reported estimated daily sale of 6,000 bottles.  Through the near century the company sold the bitters a variety of bottles were used ranging in color, size and shape that are well sought by bottle collectors around the world – selling from $800 to $1,250 USD.

By the early part of the 20th century the company continued to sell the bitters globally, however with the passage of the 1905 Pure Food & Drug Act in the United States, the content of alcohol was reduced to only 25% which lead to a decline in sales.  With the era of alcohol Prohibition in America (18th Amendment to the Constitution 1919 to the 21st Amendment in 1933), the content of vegetable bitters and herbs was increased thus making it almost unpalatable to many consumers.  The company continued to sell its “Celebrated” bitters into the late 1950’s and was known simply as Hostetter’s Tonic.

Dyspepsia's pangs, that rack and grind
The body, and depress the mind;
Slow constitutional decay,
That brings death nearer, day by day;
Nervous prostration, mental gloom,
Agues, that, as they go and come,
Make life a constant martyrdom;
Colics and dysenteric pains,
'Neath which the strong man's vigor wanes;
Bilious complaints, -- those tedious ills,
Ne'er conquered yet by drastic pills;
Dread Diarrhea, that cannot be
Cured by destructive Mercury;
Heralds of madness or the tomb;
For these, though Mineral nostrums fail,
Means of relief at last we hail,
HOSTETTER'S BITTERS medicine sure,
Not to prevent, alone, but cure.


It was not all that uncommon for people to self-medicate – much like the over the counter medications of today – with tonics, elixirs, tablets and other remedies; A difference of then to now is that concept of FDA approval and scientific proof of the benefits.  In the Westfield Republican newspaper ad from October 17, 1860, Hostetter’s outlines some of these maladies that their Bitters are intended to cure:

“For the cure of Dyspepsia, Indigestion, Nausea, Flatulency, Loss of Appetite, or any Bilious Complaints, arising from a morbid inaction of the Stomach or Bowels, producing Cramps, Dysentery, Colic, Cholera, Morbus, &c., these Bitters have no equal.”

Sounds pretty good right? It also claims to restore vigor for those that are “enfeebled,” not to mention the “indispensable” benefits it has to a nursing mother to “impart temporary strength…to the system.”  Need not remind that there is proof to that, 94 proof.

But perhaps we are hasty to assume this nostrum as anything other than scientifically and categorically proven in its qualitative medical benefits, as the advertisement states,

“All nations have their Bitters, as a preventive of disease and strengthener of the system in general; and among them all there is not to be found a more healthy people than the Germans, from whom this preparation emanated, based upon scientific experiments which have tended to prove the value of this great preparation in the scale of medical science.”

This #FlashbackFriday we take a gander at these photographs that are part of the Downing Collection here at Schoharie...