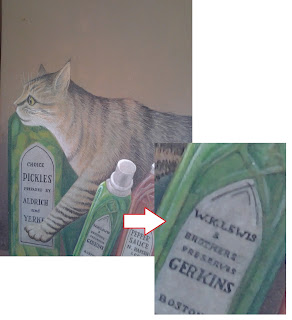 Last month we explored the Small Details on the mural in the Putman Canal Store at Yankee Hill Lock – part of the Schoharie Crossing State Historic Site.  In this post we will examine another interesting piece of that artwork and its historical context – W.K. Lewis & Bros. Pickles.

The W.K. Lewis & Bros. Company is featured on the mural as the manufacturer of a container of gherkins.  This jar seems destined for ill-fate as a canal cat is trouncing its way across the shelf – a bit of whimsy included by the artist.

W.K. Lewis was established by William K. Lewis around 1835 after several years apprenticed to and partnered in Boston, Massachusetts with William Underwood – the first pickle manufacturer in America and whose company is more noted now for the devilishly handsome cans of Deviled Ham.  Shortly thereafter Lewis associated with his father on the enterprise and later the addition of his brothers into the business brought about the addition of Brothers to the company name after the death of William Sr. in 1859.

Lewis took what he had learned from his time with the William Underwood Company and implemented the production of processed meats, preserves and sauces in a building on Broad St. in Boston – right next to his former employer.  The company expanded in 1842, including a facility in Portland, Maine – Lewis’s hometown – that was producing “hermetically sealed meats, soups, fish, vegetables, poultry and milk.”  These items were in an increasing demand as west-ward expansion flourished.  Most particularly, the mass movement of people to California in 1849-1850 as part of the gold rush brought prosperity to canning companies like W.K. Lewis.  Between the years 1849 and 1854 the company retained the Broad Street building but added to its capacity a factory on Purchase Street as well as three other buildings near the Broad Street storehouse & offices as part of the Tilden Block. 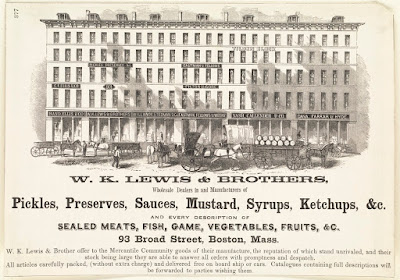 In 1859 W.K. Lewis purchased the right, under the patent of Gail Borden, to manufacture condensed milk; for which the company developed a factory at Shirley Village.  1865 saw the building of another condensed milk factory at West Brookfield.  These factories utilized what was at the time the most state of the art machinery and technology to manufacture and can such products.  By the late 1870’s the monthly production of the West Brookfield factory was at 36,000 one pound cans of condensed milk, as well as 6,000 quarts of what was dubbed as “plain condensed milk.” 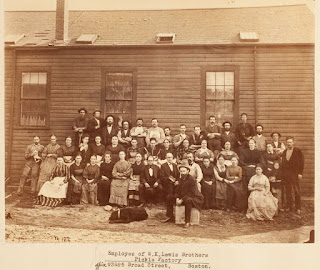 The W.K. Lewis Company added a factory in Maine on the Isle au Haut, specifically to can lobsters, in 1860.  This operation was enlarged several times and more factories were added to the ever growing company holdings over the successive years within Nova Scotia and Halifax – as well as other towns along the coast.  By 1879 they were collectively putting to market over 9,000,000 lobsters by this method.


The pickle production of the company was increased in 1869 when they established another processing factory in Lincoln, Massachusetts – a “noted pickle producing region.”  In 1873 the Broad Street facilities moved to Somerville (a hop across the Charles River) and employed nearly one hundred men whom produced over ten million pickles a year.

There is a slight indication that by the later part of the decade the pickle enterprise hadn’t worked out that entirely well.
“Among the canned baked beans on the market were those of W.K. Lewis & Brothers, of Boston. The product spread quickly to distant points. An ad appearing in the Galveston (Texas) Daily News on Feb. 23, 1878 announced that three-pound cans of they beans were being “Sold by All First Class Grocers in Galveston.”
Had it not been for Lewis, the baked bean “freak*” would not have occurred in the late 1870s. A Gettysburg, Pa., newspaper, the Star and Sentinel, noted on Aug. 21, 1888 that “W. K. Lewis of Boston received the first patent for canning beans, in 1877.”
Lewis had gone broke as a pickle dealer in Boston in 1875, being able to pay creditors only 50 cents on the dollar, according to news accounts of the time, but apparently rebounded because he knew his beans. - ROGER M. GRACE, Metropolitan News Company 2006

The W.K. Lewis & Brothers Company is represented on the mural at the canal lock grocery as part of an interpretation of how the stocked items of the Putman family business may have looked somewhere around the 1860’s within the first decade to fifteen years of its operation at that location.  While pickles were only a small portion of the items the company produced or imported, the gherkin bottle is there as part of a larger story that is included in the overall narrative of westward expansion and the inter-connectedness of people and commerce. 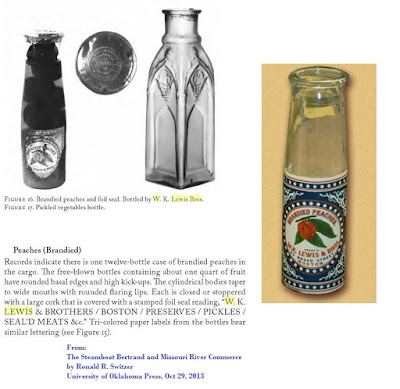