For centuries the specter of witchcraft has hung ghastly over the new world.   Children’s tales are full of knobby fingered, warty nosed screeching witches that devour them if they are allowed to be lead astray.  But what if the threat of witchcraft came to them?  What if it came at night, when they slept in their beds at home?

Iroquois for centuries believed in the fearful ways of witchcraft, and sentenced those among them thought to be a witch to a gruesome death.  Those beliefs did not change greatly as European settlers from the Netherlands, England or Palatine began their migration into the valley.  In fact, those Europeans brought their own set of witch tales with them, along with “superstitions” about those that practiced the craft.  Seldom openly discussed and nearly void in the archival records, witches were feared and indeed a part of New York history.

Long after the sensational and now infamous trials in Salem, Massachusetts, New York proposed to dig a canal across the state; across land which held spiritual meaning for more than just the remaining Native American population.  It is said that there were others on the land that were cast off for their beliefs and, choosing to live a life of nearly total isolation, had fled into the unsettled stretches of the Mohawk Valley.  For them the River was a life force, the blood that sustained their practices and gave power to their conjuring ways. 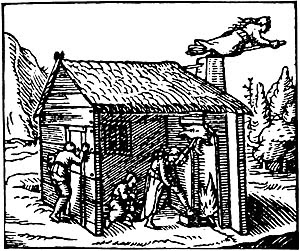 Once that grand canal, the Erie Canal, opened across the state, it meant the decline of the relative spiritual peace that had existed along the Mohawk River.  Some have said that the natural world screamed out as it was cut and dug for the canal, and the harbinger of death hung like the smoke of burning sulfur all along its path.  Those witches that for so many years hide themselves along the waterway harkened to the call and placed a curse on the canal.

Many who did not ply their trade nor work along the canal could never fully realize the horror that the curse brought along the artificial river.  Seldom brought up, the murmurs of laborers along the canal that the witches grasp on their souls was strong would be faint and often hid by those who wanted to see the canal succeed not matter what.  Disease and declining morality along the stretch from Albany to Buffalo was seen as a result of progress, the necessary evil in creating a booming economy and freer society overall.  Gradually the wisps of that sulfur smoke would overtake the Valley…

To protect themselves, people settling into the new towns and cities that grew from the fertile canal subtly employed the superstitious into their practical designs.  All along the Canalway there are architectural remnants of such things, from shoes concealed within the walls of the building to salt and witches bottles and tobacco pipes to the ever interesting witches’ chimney.  In Fort Hunter, a hub of canal activity and even the location of several broom manufacturers, there is evidence that those apotropaic magic designs existed.

Within the building that now houses the Schoharie Crossing Visitor Center, a witches’ chimney still protects those that are inside from the dreadful prospect of broom welding witches making their way in through the chimney.  A Witches Chimney is slanted from the top downward as a way to keep flying witches from entering.  And with so many fine brooms being made in Fort Hunter, perhaps they were frequent customers!

A portion of that original canal, or DeWitt Clinton’s famous “Ditch” remains in the now sleepy hamlet of Fort Hunter, NY and while the locals may not speak of it, if you are there you can sometimes hear the fading screeches of the witches …………..
Email Post
Labels: clintons ditch Halloween witch