As told to a young boy by his grandfather in 1968.

In an area just outside of Schenectady, the work of Erie Canal mules lingers in the night-time air.  Horses and Mules were used to pull canal barges by way of a long tow rope.  They walked the towpath in “tricks” of about 15 miles before being swapped off for another team.  Early on they were kept on barges between shifts, but as the canal traffic grew, stables were built along the waterway.  It wasn’t all that uncommon for a mule to meet a terrible fate – in fact it was dangerous all along the canal for animals and humans a like.  Accidents happened, disease happened…and sometimes, well, sometimes there were evil creatures afoot. 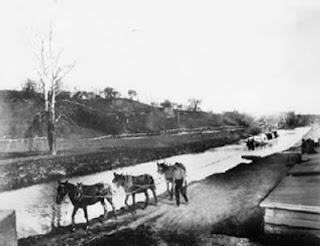 Just after the American Civil War, the use of mules on the Canalway really increased. So many horses had been used – and lost – during the war that mules were seen as a better alternative.  They ate less, only drank clean water, were surer footed, and generally a better draft animal overall.  They had an uncanny knack for self-preservation too!

An incident that occurred along the canal proves that – as a team of three ended up in the mucky water.  One of them survived, but only by climbing up atop his two companions, thus drowning them in the process.

Fatigue and drowning was something seen just west of Albany frequently.  As mules pulled toward the port after several tricks east, or those pulling west being on a long stretch of hill out of the Hudson Valley into the Mohawk.  An overzealous driver or captain could put these animals out. But at times something far worse would happen.

Reports began by 1866 of unexplained fatigue and strange behavior among mules near Schenectady.  Teamsters were only noticing it happened along the canal and not among the streets, full of wagons and carriages.  An agent of the state was instructed to look into it. Asking about the canal and of lock tenders – no one seemed to want to talk about it.  Being suspicious, this agent widened the search for answers.  He sought blacksmiths and other care takers for the mules, stable hands and veterinarian doctors. A few admitted it wasn’t disease or overwork, but that dark forces were at hand.  Not a superstitious man, the agent thought something was amiss – perhaps a criminal gang looking to make money or a new disease no one recognized.

One evening as he walked back to his hotel near the canal, this agent saw a transient lurking around a towing company stable.  Approaching he asked the man what he was doing.  With a glance back, the hobo said simply, “nuttin but for which God hadn’t intended.” The agent stepped toward the man as he disappeared into the darkness.  On the ground lay a small piece of fabric.

Feeling overwhelmingly unnerved by this encounter and being unsure just how the man simply vanished into the dark, the canal agent hurried to his room.  Unable to sleep, tossing and turning he grew more and more uneasy.  Finally, as morning approached, he dozed off… just long enough to have a fit of a dream…more like a nightmare.

He dreamt of being chased. By what he did not know. But throughout the chase small shadows ran up the sides of buildings lining the canal.  A small, dark figure closing in behind him.  Awakening with a shout and nearly out of breath, the agent hastily gathered his things, threw them into his carpetbag and left the hotel.  Determined to return to his offices out near Syracuse, he boarded a barge headed West.

Almost immediately the trip was interrupted.  The mules towing the barge had collapsed on the path. An oncoming barge had pulled to the side, its mules frightened by what lay in front of them.  As the agent stepped out onto the deck and attempted to get the attention of the crew who had gone to see what could be done with their team, he felt a tug at his pant leg.  Looking down there was a young boy beside him whom he had not noticed aboard the boat before.  In the child’s other hand was a raggedy old doll.  Missing an eye, straw and cotton stuffing exposed at the leg and arm, with a torn dress that was missing a piece.  The boy just looked up at the man, staring blankly into his eyes.  The creeping uneasiness swelled inside, weakening his knees and drying out his mouth.  Trying to speak, the agent softly uttered and spit, “Who… who… are you, young man?”

The boy said nothing but raised his hand palm up as if to ask for something.

The man asked with great difficulty, “What is it that you want?”

In a hoarse, gravely voice, the boy replied, “…for which God hadn’t intended.”  He raised his other hand and showed the missing piece of dress.

It was then the man, gasping to comprehend how this could be, realized the bit of fabric he picked up outside the stable the night before matched the pattern on the dolls dress.

Pulling the fabric from his pocket, it slipped from between his fingers and softly floated to the deck boards below. He watched it fall, so slowly like time had nearly stopped. When it landed, he looked up and the boy had vanished. So had the fabric.  Dazed, stunned, confused and bewildered… the agent staggered back into the cabin.

As the crew returned, having given up to the fate their mules were dead, they saw his sweat covered pale face and asked what the matter was.

The agent could barely stammer, dry mouthed, “…only for which God hadn’t intended.”

All along this section of the canal, mule hooves can still be heard carried on the nighttime air, plod…plod…plodding along.  On crisp Autumn evenings, when the canal of today is closing, the old historic canal seems to come to life… well, an afterlife, and hobos along the rails still speak of the small shadows cast against the buildings. 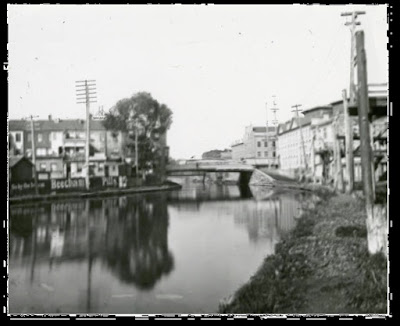