In the late 1850’s a family by the name of Brown plied the waters of the Erie Canal aboard the barge named Elizabeth.  The father and mother ran the boat and its crew, which consisted of two young sons and a red-haired daughter by the name of Winnie.

After a tragic accident that occurred in '58, the family was never quite the same.  To cope with it, Winnie had developed a close bond with her doll, whom she called Becky, and which seemed to have its own personality.  Winnie would spend hours when not doing chores playing with and talking with her doll.  After growing concerned about this, her parents set out to get rid of the doll and force Winnie to “grow up!”

Early one morning Mrs. Brown quietly removed Becky from under Winnie’s arm as she slept and tossed the doll overboard into the murky canal water.  Upon awaking a short time later, the daughter was inconsolable at the loss of her beloved companion.  Not even an awaiting hearty breakfast of sausage, griddlecakes, and eggs could calm the child beyond hysterics.  Her brothers even tried to distract and comfort Winnie by trying to get her to play one of their favorite games, Pirates of the High Seas!  As they pulled her out on the barge deck, and at the moment Alfred said, “Arr, ye has treasures hidden in th…” the barge rocked violently in the water.  The horses had been walking and towing the barge all morning, but at this moment they stopped and refused to move any further no matter what Mr. Brown did to prod them along.

Mrs. Brown then shrieked from within the cabin.  As the children and father rushed to her, Mr. Brown entered the door and saw sitting in a chair at the small table, the soaking wet doll Becky.  Mrs. Brown had turned her attention away from the stove when the boat rocked, and witnessed the doll had returned, at least an hour and several miles from where it was left for a watery grave.

Before he could think it over much, Mr. Brown grabbed the doll and tossed it into the stove…just as Winnie and her brothers entered the tiny room.  Mortified, his daughter watched as Becky had been tossed into cremation.  The brothers stood pale faced.  It was then that the darkness came.
Clouds seemed to block out the sun and the cabin was as dark as night. The fire in the stove whistled and hissed… no one spoke or made a sound.  In moments the sun shown again, and the fire crackled away. The family was quiet, quiet all of the day and into the evening…doing their chores in silence, eating in silence, plying the canal between Utica and Fultonville in silence.

To bed they went, in silence, moored to a snubbing post until morning.  Mrs. Brown was the first to awaken, to stoke the woodstove and prepare breakfast as the sun was not quiet above the edge of the valley walls.  Mr. Brown joined her for a cup of coffee, still in silence.  They looked in on their darling Winnie, pulling back the curtain that separated sleeping quarters from the kitchen.  Horrified, they saw in her arms…Becky. Winnie’s face had seemed to harden, her young round features now more angular and sullen.  How could this doll be there under her arm!?

Mrs. Brown fell to her knees, awaking the boys as Mr. Brown ripped the doll from its place.  He tore the head from the body, and once again tossed it into the woodstove while stomping his feet and crying out in the name of the Lord.  Poof, like that they thought it would be over for good. Winnie would muster up herself and go on…

Within a few short hours Mr. and Mrs. Brown had taken ill, their boys had grown pale and bruises shown on their faces and arms.  Winnie had aged well beyond her years, become frail and unable to speak. The entire family drifted away onto a slow death there aboard their barge.  It wasn’t until the next evening that another barge pulled up alongside and stopped, though many had passed by during those two days.  A tall slender man with a high hat stepped aboard and called out for anyone to reply.  When he received none, he entered the cabin.  Confronted with the horrific sight of the corpses and the overwhelming stench of their decay, he quickly turned and ran out the door…tripping over a doll that lay on the floor.

Standing up, dusting himself off, he looked at the doll now in his hand. Nodding slightly to himself, he grinned and stepped back on his barge, calling out, “Amelia, come here, I have a new dolly for you!” 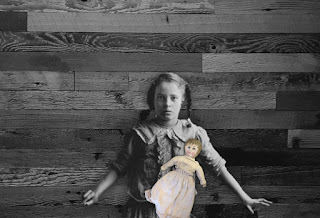 If you liked this Eerie Halloween Tale, check out some of our past series of spooktacular stories: Click Here!