On a recent drive with my eight-year old son through Rotterdam Junction we drove across the Lock 9 bridge and he poised an inquiry about some strange things he saw below.  I gave him a brief explanation but decided that we could turn it into a short evening research project when we got home (kids love it when that happens!).

Here are some of our findings:

During times of low water on the modern canal when it is closed to navigation, there are remnants of the past visible at Lock E9 in Rotterdam – World War I era concrete barges.  Now, concrete does not sound like the optimal boat building material, but there was a good reason for its use.   These barges were originally built to transport freight along the canalized Mohawk River and were purposely sunk so that they could be used as tie-offs for boats as well as erosion control after their usefulness had ended.

During World War I, metal and wood were needed for the war effort.  So, despite the concerns with brittleness, cracking, weight and myriad other issues, concrete was employed instead.  Molded on a steel mesh into a buoyant hull the crushed rock cement yielded at least adequate results – as barges were easily and quickly made at a far less price than metal or wood.

The general director of the U.S. Railroad Adminstration, William McAdoo, took control of the New York State canal system during this time, in order to move military freight from the Great Lakes to the New York City ports and off to the theaters of war.  McAdoo appointed G.A. Tomlinson the general manager of this method in April of 1918 and upon this appointment Tomlinson discovered the canal lacked the barges required of such an enterprise.  The effort needed to haul nearly 10 million tons of grain and coal during a navigation season to be successful.

Regarding the decision to build from concrete, the general manager told the New York Times that year that, “We are going to build a lot of barges…[and] if the first ones work out all right we shall build more like them.  If they need improvement, we’ll improve them.”  True to New York style.

Tomlinson was a shipbuilder by trade, so the endeavor of quickly manufacturing an enlarged barge fleet (adding around 75 new vessels) was overseen by someone familiar with the task at hand.  The new barges would be considerably large given their building material – roughly 150 feet in length and 20 feet wide, each barge weighed around 310 tons.  These behemoth boats could only carry up to 500 tons of cargo and cost nearly $2,000 less than a vessel constructed of wood (approx.. $5,500 at the time - but lets put that in perspective: that value in 2014 was roughly $85,937.50).

The Erie Canal seemed as logical a place as any to attempt the use of concrete barges; having a shallow channel that lacked wave surges and salinity.  Much to the delight of the majority of citizens around the world, the war came to an end with the Armistice of November 11th, 1918.  The Federal government having had control of the state’s canal system just over six months, so even while the concrete barges worked relatively well, their utility was drawing to a slow end.  There was no longer a need for such massive barges along the Erie, and taken into account that they had an average lifespan of only five years and had twice the draft of their wooden or steel counterparts the clock was ticking for the 4-inch-thick concrete hulls.  The ships were also brittle and they easily cracked if the barges grazed a piling or other obstruction in the channel, causing further frustration.

The short lived concrete barges were gradually phased out from duty along the canal. Several damaged boats were broken up and allowed to sink where they were to prevent obstructions, while some still serviceable barges were deliberately scuttled along the approaches to the canal locks in order to serve as both boat moorings and a form of erosion control.  Those concrete barges that were sunk near a number of locks are typically submerged during the regular navigation season; however, they become visible again once the canal is drawn down during the late fall.

New York State Canal Corporation’s Lock E9 in Rotterdam Junction happens to feature some of the concrete barges, which are fully visible until the Canal Corporation begins lowering the movable dams in the spring.  When the canal opens back up in May of 2015, no doubt several travelers along that legendary waterway will pass them by without realizing the unique history those bulky concrete hulls represent.

Perhaps that was the best part of our drive the other day, having the opportunity to witness their remnants, but more likely the single reason it was great for me was that I shared it with my child.   More so, that because of his question we explored that part of history together.

The Friends of Schoharie Crossing are gracious enough to support the events & programming at the site through various activities, sponsorships, fundraising and volunteering.  Their operation of this blog, their twitter account and other outreach methods are greatly appreciated.  Please consider becoming a member and supporting the wonderful heritage of the Erie Canal, Fort Hunter and Schoharie Crossing State Historic Site.
-Thank you 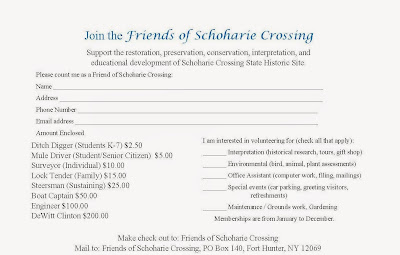