Geocache Kick Off for 2016 @ Schoharie Crossing!

The Saratoga-Capital District New York State Parks Regional Geocache Challenge is NOW in full swing!  Schoharie Crossing held a Kick-Off Event on Saturday, May 28th for local geocachers looking to start the challenge.  The event was terrific and many geocachers stopped in, picked up the challenge passport and had some refreshments before heading out to find the cache’s spread out all over the site.

Dozens of cacher’s explored Schoharie Crossing all day as they searched with their GPS devices or cellphone App’s for the six challenge cache’s on site.  Cacher's from as far away as Syracuse and Lake George were in attendance. To sweeten the pot, the site also has five *Bonus* cache’s to make the site more appealing to cachers.  Add to that two Canalway Bicycle Path cache series that run from South Amsterdam to the site and then on toward Fultonville, cacher’s have plenty of Smiley reasons to come to Schoharie Crossing!


Unfamiliar with Geocaching?  “Geocaching is a real-world, outdoor treasure hunting game using GPS-enabled devices. Participants navigate to a specific set of GPS coordinates and then attempt to find the geocache (container) hidden at that location.”(1)  If you have not yet discovered the fun of geocaching, check out http://www.geocaching.com to find out more.  It is a great way to get out, explore and enjoy the wonderful surroundings! 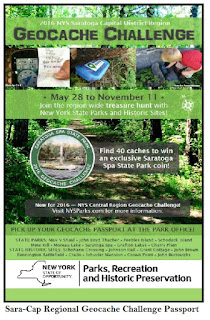 This year, the Sara-Cap NYSParks Challenge has over 70’s cache’s hidden in 18 parks around the region.  The goal is to find at least 40 of them, and mark the passport with each cache’s unique stamp.  When a cacher finds and stamps more than 40 of the challenge cache’s, they can enter the passport in order to receive a special limited edition 2016 Saratoga Spa State Park GeoCoin.
There are a few rules to the game, so be sure to check out the “How to Play” and “Rules” before getting out and geocaching.  Links are provided below to down load your own passport, or visit one of the parks participating in the challenge! 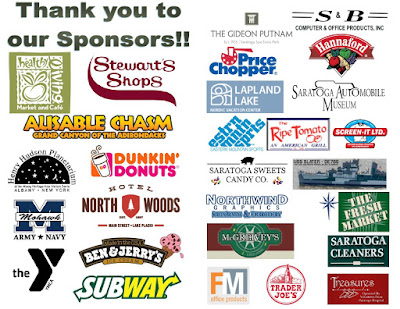 A few safety things to consider….

*Bring insect repellent for mosquitoes and ticks.
*Watch for poisonous plants such as ivy, sumac, giant hog weed, etc.
*You might encounter wildlife: deer, raccoons, groundhogs, coyote, snakes, snapping turtles, Canada geese, frogs, etc. Please leave these animals alone. And remember; they are more scared of you than you are of them.
*Before heading out, download a parks map or get one from the park office. If you do get lost, stay put! Use a whistle and call park police