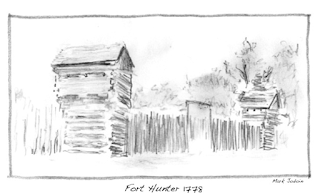 As the specter of war lingered over the Mohawk Valley, tensions between the patriot Whig faction and the loyalist Tories grew. By 1775, Sir William Johnson was dead and the responsibility for the Northern Department of Indian Affairs fell on his nephew (and son-in-law) Guy Johnson; who had his hands full from the start.  Guy and Sir Williams son John felt under threat by committees in Albany County, but most unsettling was the fervor growing against them within their own Tryon County.  In the spring of ’75, Whig representatives from those committees met with Col. Guy Johnson and Mohawks at Guy Park Manor to negotiate terms of peace to ensure those loyal to the British Crown remained out of the fracas.

Mohawks under Tiononderoge chief Tigoransera – or Little Abraham – attended this council.  Little Abraham struggled to convince Mohawks to remain neutral.  The overall Iroquois diplomatic stance had been neutrality with the ability to play the Americans and British against each other as they had for generations with the French and British.  Mohawks in particular found this difficult under the new circumstances, and chiefs at the two largest Mohawk castles at Fort Hunter and Canajoharie felt their control slip away as younger men were swayed toward loyalty to the King, if not only to the Johnsons.

Isabel Thomson Kelsay in her 1984 work Joseph Brant 1743-1807: Man of Two Worlds, declares Tigoransera “a true neutral” and that his continual pleas – especially those in coming years at Fort Niagara – were impossible against the Johnson and Butler legacy that did what it could to polish the covenant chain between the Iroquois and British Crown.

Little Abraham had nearly lost all control as well as the entirety of his home and community along the confluence of the Schoharie Creek and Mohawk River during the 1779 Sullivan campaign.  The Fort Hunter Mohawks – those few that remained in the Valley after 1777’s retaliatory strike by patriots and Oneida as counter to the ambush at Oriskany that summer – had only been spared what they had left by the interjection of Gen. Schuyler and Gen. Washington.  Both of whom recognized the efforts of Little Abraham on his stance of neutrality though still uncertain of its actual validity, and neither wished to kick the hornet’s nest so close to Albany. 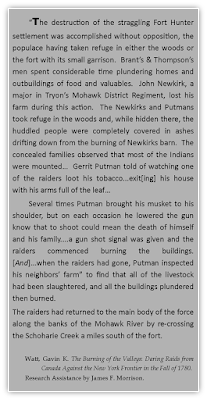 What happened between the negotiations in 1775 and then had been a difficult strain on the tenuous “peace.” John and Guy Johnson had fled the Mohawk Valley in the winter  of ’76 as three thousand Continental and Albany Militia troops under Gen. Schuyler and Gen. Herkimer advanced to arrest them.  In order to do so, this force had to pause before reaching Fort Hunter and the Lower Mohawk Castle to follow frontier diplomatic protocol that required approval from the chief for an army to pass through their land.  This combined force was proof that the Mohawk Valley had risen for the patriot cause.

The Mohawks were outraged and Schuyler apologetically placated their leadership by attaching Little Abraham and other Elders as negotiators at council with John Johnson; though he would be arrested and removed to Fishkill while his wife Mary was held in Albany.  By spring they had been released, yet under threat again from Continental forces of the 3rd New Jersey Regiment advancing under command of Col. Dayton.  Once more, permission was required at the Lower Castle, and this time Dayton’s presumed inexperience with frontier diplomacy meant the request only increased tensions, yet allowed enough of a delay that Johnson escaped north through the Adirondacks to Canada with hundreds of loyalist followers.

By 1780 the Valley had seen continual raids by Iroquois and Loyalist forces against homes, forts and fields that devastated the landscape as well as killed unknown numbers of residents.  Little Abraham sought throughout those years to convey neutrality and hold together the remains of his Mohawk community. In February of that year, he along with three other Iroqouis peace negotiators traveled toward the British stronghold of Fort Niagara with letter of parley from Gen. Schuyler.  There were intercepted by Joseph Brant and members of his loyalist raiding party.  The four were brought into the fort, interrogated, ridiculed by having their peace belts rejected and then cast within the depths of the bulwark.  It was in that cold, damp dungeon that Little Abraham – Tigoransera of the Mohawk – fell ill and died.

If you've been to the site and would like to supply a review, please click this YELP! button! Thank you!