While looking into another subject, an article in The Daily Leader newspaper from October 2nd, 1897 sprang up.  The Daily Leader was a newspaper that served the Gloversville, Fulton County, NY area from 1887-1898. And while Gloversville was known globally for its fine leather and – of all things – gloves, republished articles of interest from all over are commonly seen in its pages.  The article that popped out was one such reprint; from the Rochester Post-Express.
A reporter documents tales of the old Erie Canal from a locktender who had worked the canal for fifty years - first as a driver then as a tender.  The locktender of Lock 65 in Rochester, Daniel Hibbard, recalls the luxury of Packet Boat travel. 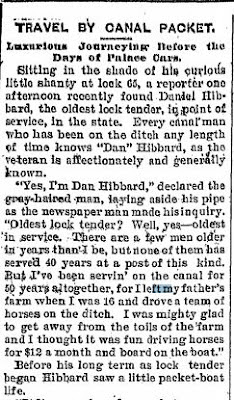 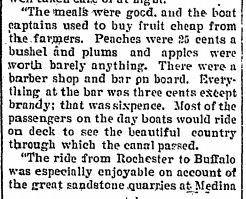 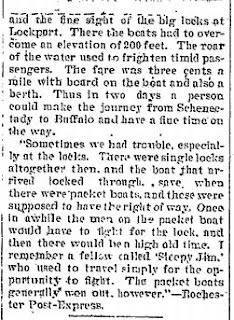 Found in the Documents of the Assembly of the State of New York, Volume 6 from 1887, Hibbard was making a fine salary of $45 per month* in the decade before this article ran.

Not much else has been uncovered about this Dan Hibbard at the moment, but his recollections on Packet Boats of the Erie Canal are nonetheless pretty interesting as well as exciting!