On September 30th, 1917, an article from The Sun newspaper proclaims, “In the Barge Canal system the people of the Empire State have created what has been declared to be ‘the most valuable single commercial facility on this continent.’” Originally approved in 1903 as the $101,000,000 Plan, State Engineer and Surveyor Frank M. Williams announced in 1916 that work would be completed in 1918. But on April 6th, 1917, when the U.S. declared war on Germany, the Canal almost saw its demise due to shortages of coal, men, steel, and other materials that were being redirected to the war effort. However, patriotic duty compelled a push to complete the modernized Barge Canal according to schedule; argued to be of the same significance as the Panama Canal, the Barge Canal symbolized New York’s patriotic contribution to the war. New York would serve its wartime duties with the aid and aspirations that the New York State Barge Canal offered. 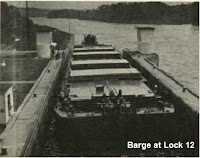 Despite the significance that the Barge Canal symbolized and the commercial practicality of its existence it could offer, the canal experienced multiple construction obstacles that nearly led to its abandonment; however, patriotic duty had its implications. Men were called to the Front or to other industrial needs and away from construction projects. An article from the New York Tribune reflects on the construction of the Canal in January 1919, stating the massive shortage of men foisted a threat to the canal project. Scarcity of manpower imposed even greater ramifications when the necessities of war pulled resources from the Home Front. Steel was necessary for the construction of a movable dam on the Genesee River; however due to a shortage in steel, canal workmen constructed a temporary wooden dam in its place. Just east on the Genesee River, the steel shortage continued to hinder the construction of a guard lock. Construction on the lock was delayed and finally finished the morning the Canal opened to navigation on May 15th, 1918. Despite overcoming obstacles during construction and opening the Canal on the promised date in the Spring of 1918, the Canal continued to be plagued with difficulties and technicalities. The most prominent restriction to the Canal’s patriotic intention was the lack of boats and barges. In the days leading up to its opening, there were only 400-500 antiquated canal boats. The inability to utilize the Canal to meet wartime needs forced the State to concede to Federal control.

On April 17th, 1918, with the expectations on the Barge Canal falling short, Director General McAdoo of the Railroad Administration ordered the New York State Barge Canal System be taken over by the Federal Government and demanded that a fleet of barges be constructed. Within days, contracts were let for barge construction and nearly 200 privately-owned canal boats were commandeered. The Federal Government’s annexation, however, was a welcomed circumstance of patriotic duty. In times of war, at least in the first modern war, private enterprise and capital could not meet the economic and material needs a war required. Upon examination, some may even argue that the incorporation of the Canal into the Railroad Administration was a reflection of the dichotomy of the waterways and rails. The coal shortage during the Winter of 1917 is an exemplarily example. Anxiety swept across New York State as it survived the brutally cold winter months and feared what next winter would have in store. Hope came in the form of Superintendent of Public Works, Major General William W. Wotherspoon’s pronouncement that the Barge Canal would alleviate New York State’s apprehension. This announcement put blame on the railroads; with the support of the Federal Fuel Administration and railroad authorities, the shortage of coal in the Winter of 1917 was a consequence of insufficient railroad equipment, rather than increase in demand or decrease in production of coal. The railroads were too expensive and too unreliable; they needed a counterpart. The connections between the canals and the railroads would allow them to function together as opposed to against each other; where the rails fell short, the Canal picked up the slack. In this fashion, the Canal, in spite of ongoing obstacles, would find its way into wartime commerce.


The Canal’s importance for the U.S. war efforts were influenced by Germany’s canals. An article from The Sun in September 1917 illustrated Germany’s waterways. It argues that without its canal system, Germany would not be able to feed and equip its troops. The modernized Barge Canal System would link the Port of New York to the Great Lakes, which in turn opens up to oceanic navigation through the St. Lawrence Seaway and, more importantly, to western wheat fields; wheat capable of feeding troops in Europe. Pennsylvania steel could also be shipped north via rail and then transported to the Canal. Major General Wotherspoon’s demand for barge construction also lent support to the war effort. Within a few weeks, eight barges began construction, four of which were exclusively for iron ore. Major companies operated barges along the Canal, such as the Ore Carrying Corporation, Standard Oil Corporation, and the General Electric Company. The Canal would and did alleviate commercial and transportation difficulties; without its presence and modernization efforts, responsibility would have remained solely on the railroads.

From its conception, the New York State Barge Canal was borne out of the memory of the Erie Canal. However, the first modern war would morph its significance. The symbol of State prosperity became the emblem of New York State’s patriotism. Obstacles that were overcome during construction came to symbolize a progressive and optimistic spirit unique to New York State. The patriotic duty that necessitated its completion would also bring New York State back to the forefront of trade and revitalize competition with the rails. Without the Barge Canal, the country faced the risk of wartime shortages and decreased morale; the Barge Canal helped ensure wartime cohesion and victory abroad. 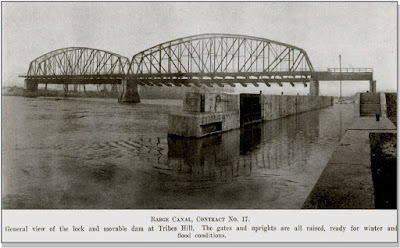 *Editors Note: This article previously appeared in the Summer 2017 Newsletter.

_____________
*Jessica Hojohn is a research intern that is compiling information regarding the NYS Barge Canal System & its engineering during the early 20th century and in particular the role of World War I in the development of strategies to complete as well as the resources that the canal conveyed for the war effort.