A while back a small group of people from California stopped into the Schoharie Crossing Visitor Center as they vacationed and decided to add a bit of genealogy and heritage to their journey.  A gentleman in the group asked what information was had at the site about a particular drowning in 1814.  Surprised that the staff was aware of the fateful evening that Christian Service lost his life crossing the bridge over the Schoharie Creek, the group enthusiastically stated they were descendants of that family.  Here is what the 1892 publication, The History of Montgomery County by Washington Frothingham mentions about that occurrence – one of many tragic episodes of life lost attempting to cross the Schoharie.

“The first bridge of any importance ever built over the Schoharie creek was that constructed in 1796 at Fort Hunter by Major Isaiah Depuy…After its completion a stage route was established along the south side of the river from Albany to Canajoharie and adjacent settlements.  In 1814 Christian Service, a tanner and manufacturer of boots and shoes, living in [the town of] Florida, was drowned while attempting to cross this bridge.  The accident occurred in the night, the ice having carried away the eastern portion of the bridge, a fact unknown to the unfortunate man, who urged his team with a whip, and they leaped into the water, carrying himself and the sleigh with them.”

The group mentioned that in tracing the family history they had come across information regarding his drowning death, but other branches of the family tree were hard to trace as the surname has gone through several spelling variations.  Since they were on a schedule and had to be on their way north, the visit was short but future correspondence is expected.  The site has a State Board of Education historical marker that mentions the bridge that existed over the creek prior to the original Erie Canal at that location.  Various methods across the waterway have been available for centuries -  as covered in a previous edition of the Friends Newsletter - even each of those had changes over time.

Best of Luck to those descendants as they trace the path of their family though history – all the while creating their own. 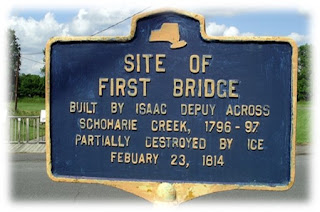 *Editors Note: This article ran in the Summer 2015 Friends of Schoharie Crossing Newsletter