Pot Ashes and Pearl Ashes - also known as Potash - is another term for potassium carbonate, especially from wood ashes.  This potassium or potassium compound being often employed in agriculture or industrially and was often used as a leavening agent in breads before the creation of baking powder.
Samuel Hopkins was granted U.S. Patent No. X1 in July of 1790 for his process to manufacture Potash.  This substance was America’s first industrial chemical. It is an impure form of potassium carbonate mixed with other potassium salts. Until the 1860s it was solely     derived from the ashes of hardwood trees and other plants. Potash was a leading industrial alkali from       antiquity until the close of the nineteenth century, when it was finally abandoned for most uses in favor of soda (sodium carbonate). It was essential for making soap and glass, dyeing fabrics, baking, and making saltpeter for gunpowder. Today it is principal ingredient in fertilizers.   In the late 18th and early 19th-century, its production provided settlers a way to make badly needed cash and credit as they cleared their wooded acreage for crops. To make full use of their new land, excess wood, including stumps, needed to be removed. The  easiest way to accomplish this was to burn any wood not  needed for heat, cooking or building. Ashes from hardwood trees were used to produce lye (potassium hydroxide), which was in turn used to make soap or boiled down to produce potash.
Hardwood could generate ashes at the rate of about 60 to 100 bushels per acre.  In the decade following the granting of Hopkin’s patent, ashes could be sold for about $3.25 to $6.25 per acre* in rural New York State - nearly the same amount as hiring a laborer to clear the same area.

The refined potash was in an increasing demand in Europe.  They sought the compound for use in the   production of glass and ceramic goods. American    hardwoods, besides being more abundant, are said to have provided a higher yield and quality potash than  European wood. In some parts, potash receipts became a common form of currency. Some settlers found potash production to be quite lucrative.  After about 1820, New York replaced New England as the most important source; by 1840 the center was in Ohio.  Unfortunately, this approach to generating fast cash increased the pace of deforestation, adversely affecting the wildlife and ecosystems of those areas.   Today “potash” is most commonly mined where it was deposited by sea water in ancient inland oceans. After the water evaporated, the potassium salts crystallized into beds of potash ore. Often those deposits are a   naturally occurring mixture of potassium chloride and sodium chloride, more commonly known as table salt. In processing plants, the potassium chloride is separated from the mixture to produce potassium fertilizer. Other potassium salts can be separated by various methods, resulting in potassium sulfate and potassium-magnesium sulfate.  Today, Canada is the largest producer of this form of “potash.”
The ancient uses of this compound still exist and in some cases those have evolved to where it is used in aluminum recycling, to produce potassium hydroxide, in metal electroplating, oil-well drilling fluid, snow and ice melting, steel heat-treating, in medicines and treatments, and water softening. Many other potassic chemicals are derived such as those for soap manufacturing, animal feed supplements, cement, fire extinguishers, food products, photographic chemicals, and textiles. These non-fertilizer uses have accounted for about 15% of annual potash consumption in the United States. 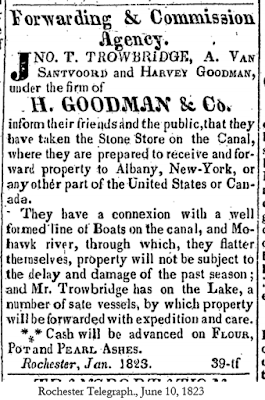 **This article was originally published in the Winter 2019 Friends of Schoharie Crossing Newsletter.
Email Post