In an effort to not be a baton waver at a dead mule beating party, the blog covering the Irish on the canal will be limited to some bits of interest and links to pages that shine some light on Irish workers, their song and the Erie Canal in a much better way they we may be able to produce.
There is absolutely no doubt regarding the impact that Irish immigrants had on the construction and operation of the Erie Canal – their lasting impression not only on that artificial river but the culture and population of the canal corridor are felt even to this day.

Chris Clemens operates a blog titled, “Exploring Upstate New York” that is well worth a look over and follow.  In a November post he visited Tipperary Hill in Syracuse that features not only as a predominately Irish neighborhood, but reportedly the world’s only upside down traffic light.  Why? You might ask.  Check out the link:  http://exploringupstate.com/upside-down-traffic-signal/

Many of the well-known – but perhaps not the MOST well-known – Erie Canal songs are rooted in Irish tradition.  Pat Flannery covers that a bit on his page here and American Antiquities Journal  mentions a bit more regarding the role of Irish music during the construction. 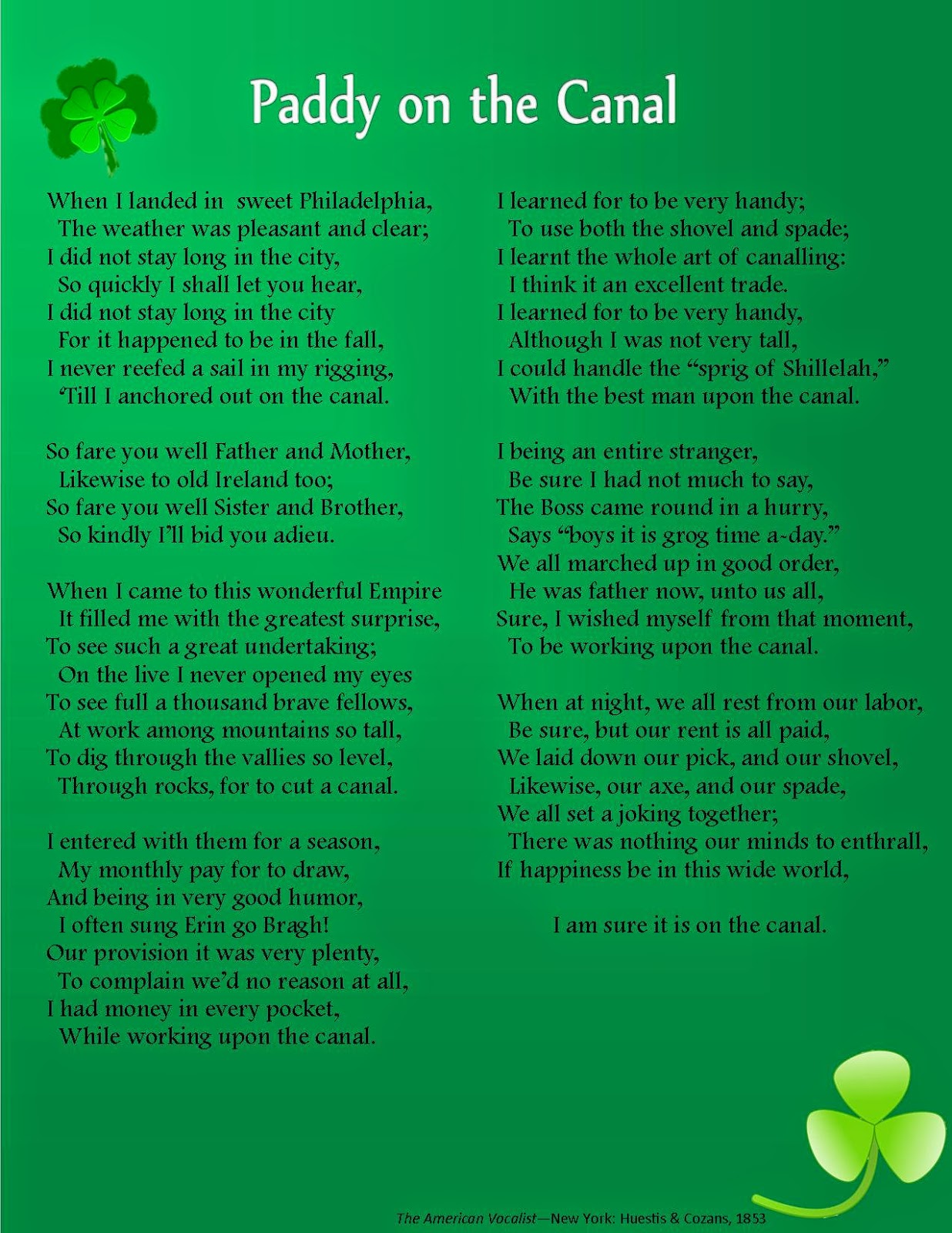 A take on the Irish who were so vital to not only the construction but the settlement of the state and nation that we can appreciate is posted on The Wild Geese blog that identified the immigrants as not the builders so much as the “backbone” of the canal.  http://thewildgeese.com/profiles/blogs/the-irish-backbone-of-the-erie-canal  What makes this interesting is that it does not diminish the overall effort of the workers, but includes the Irish as a part of the whole – that they experienced the building, engineering and wilds of digging the canal much like their non-immigrant counterparts.  Another posting on that site suggests if you are searching for your Irish Ancestry to seek records and information along the corridor – in towns and cities that may have been a way point or brief settlement for an immigrant who might have been a worker or traveler.

Speaking of Irish travel, the New York Historical Society put together and posted this interesting bit about “Irish Speakers in Nineteenth Century New York” that is worth a read: http://blog.nyhistory.org/the-unadulterated-irish-language-irish-speakers-in-nineteenth-century-new-york/  It really drives home the concept of diversity in this country from the very beginning and the methods that cultures undertake as they combine.  As the article states, it may be difficult to realize now through our modern lens just how diverse language was then for Irish arriving in America.

For those local to the Capital Region of New York, or thinking of visiting, The Irish American Heritage Museumin Albany, NY  is a fantastic place to stop in and visit.
Email Post