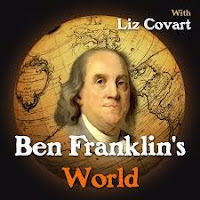 The idea of Federal regulation of the Erie Canal was partially underlying the answer to Liz Covart’s Time Warp question during a recent Ben Franklin’s World podcast with Janice Fontanella, Schoharie Crossing State Historic Site Manager.  This thought has crept up a few times when speaking with people, in particular those that are just as interested in the railroads as they may be in canals.  A recent talk by Craig Williams at the Schenectady County Historical Society operated Mabee Farm in Rotterdam, NY hit on this partially as well - when a member of the audience asked a question about the tolls operated on the canal verses funds from the railroads in terms of passenger and freight cargo.

While a simple answer may be that in the early Republic, the concepts of government regulation were still seen as tyrannical and the finer nuances of authority and power were developing, we must remember that we have the advantage – if we want to think of it that way – of viewing those matters in hindsight and having the perspective of the era in which we live today.
Those inquiries have recalled the case of Gibbons V. Ogden (1824) and the constitutional questions of commerce regulation that it grappled with.  Those questions combined with the issue of a states right to apply its own regulatory authority present themselves in this early Supreme Court case.  Below is posted an essay on that court case as it pertains to the aspects of Article I Section 8 of the U.S. Constitution as well as how it began the ever evolving development of federal regulation of commerce throughout the country. 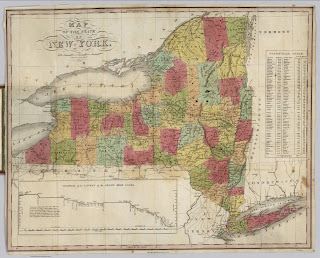 In the ruling, Marshall galvanizes further the understanding of the enumerated powers given to Congress in Article I, Section VIII.  Going further, he expounded on the fact that “commerce is more than traffic.”  Additionally that regulatory powers do not terminate at State borders and jurisdiction is provided to the Federal government even within the States boundaries as Federal law – even when in conflict with State laws – is “supreme” (Vile 3).  Regarding this case however, the fact that a Federal license overrode a State license was upheld, but it also left open the option moving forward for future State regulations within the scope of their own powers (Cox 641).
Marshall, in his ruling opinion, not only set out the courts judgment but also examined the understanding of commerce and the interpretation of the Constitution.  In that ruling, he stated that the case was brought before the court as it was thought that the State Court ruling was “erroneous” and “repugnant to the Constitution and laws of the United States.”  In response to this, it is cited that Congress not only has the power to regulate commerce but also “to that which authorizes Congress to promote the progress of science and useful arts” (Marshall) – further evidence that the idea of regulating navigation was more encompassing than just the materials or profit aboard vessels.
Arguments in the case insisted that the states “were sovereign” from each other but in Marshall’s opinion the court – and Congress – clearly utilize that in “league into a government” that they entered into and participate in the United States government.  They are in fact then, not separate entities.  Their union in the Federal system means they must adhere to the “enumeration of powers expressly granted by the people to their government” and if that is denied, the government may be deemed invalid and “crippled.”  It is at this point that the opinion expresses in terms of “understanding” views on strict constructionism and the interpretation of the Constitution; Something that continues as political debate even to this day in America.

The opinion also declares that commerce is greater than mere traffic as it is additionally intercourse between people of ideas, services, goods, ideas and perhaps more – be that with “nations and parts of nations” and with that concerns the authority over regulation of navigation.  Marshall states that this has always been understood to be included within the idea of commerce. That providing that power to be given to the “supreme” government authority in Congress, it asserts that “American vessels…[will be] navigated by American seamen” and that “no sort of trade can be carried on between this country and any other to which this power does not extend” (Marshall).  This would be seen as an even greater extension of Congressional power in the subsequent decades.  As defined in broad terms by Marshall, commerce regulation has opened the door to increased Congressional authority in regards to laws overseeing interstate systems (Vile 3).
At the heart of this particular court case is that term, “among” in the Commerce Clause.  Marshall lays out in his opinion that this is defined as “intermingled” and that any such commerce that exists within or between states may be viewed as such, regardless or indifferent to boundaries as each State is in agreement under the Federal system.  The concern of dissenters being that any enterprise with a State – even “completely interior traffic” in some way constitutes intercourse by that wide definition and therefore commerce that could be regulated by Congressional authority.
Marshall, in claiming “the genius” of the Constitution explains that “internal concerns” that solely concern or effect the state as “completely internal…may be considered as reserved for the state itself.”  However when commerce includes goods or products of any kind with distribution or import from foreign nations, it by definition must be under the jurisdiction of the United States Congress.  Since navigable waterways “penetrate our country” and pass into the interior sections of states, the right of Congress must be exercised.
That right may apply equally to all commerce, but in terms of navigation – as in this case – that “any matter, connected with commerce” may also be regulated under the same provisions.  The States for that matter may also exercise their powers internally as within their own jurisdictions if no Federal laws exist that forbids such power, to do so by Constitutional authority: When in conflict with congressionally legislated or Constitutional powers, the states “must yield to the law of Congress” (Marshall).

The ruling did not clarify the issue overall and the debate over “State versus Federal control of commerce” would continue to be a matter brought before the Supreme Court.  The opinion given in the ruling for Gibbons v. Ogden (1824) was upheld in the case of Brown v. Maryland (1827) (Cox 641) which involved the requirement of foreign goods importers to obtain a Maryland State license.  In a six-to-one ruling, the Supreme Court ruled that the State could not mandate that licensing as a regulation on commerce as the Federal authority and control of trade with foreign nations superseded State regulation of business as per Article I, Section VIII of the United States Constitution (Vile 3-4).  The court placed restrictions on Congressional authority two years later in its ruling on Wilson v. Blackbird Creek Marsh Co. (1829) in which it upheld Delaware State law regarding the allowance of a company to place a dam across navigable waters (Marshall, Willson, et. al).
In the three decades following Gibbons v. Ogden (1824), and under Chief Justice Roger B. Taney the court shifted to support of State power regarding “immigration, slavery, alcohol, and unemployment compensation.” Nonetheless, a sectional divide germinated further.  Many Northern newspapers supported  the regulations as Southern concerns with the Federal Congress increasing control of economic devices and the effect on southern agriculture as well as the ever present issue overall of States’ rights.  In the years after, the ruling has been cited as precedent in the expansion overall of the Federal government “control of interstate commerce” in other cases of varying means of transport – such as: Wabash Railway v. Illinois (1886) and in Swift v. United States (1905) (Cox 641).    The Wabash case continued an increase in the limitation of State rights and furthered Congressional control of interstate commerce by effectively leading to the establishment of the Interstate Commerce Commission as a regulatory body.  Railroads were determinate on State laws and taxation – in its’ ruling the Supreme Court stated,
“…It cannot be too strongly insisted upon that the right of continuous transportation from one end of the country to the other is essential in modern times to that freedom of commerce from the restraints which the State might choose to impose upon it, that the commerce clause was intended to secure” (Wabash)
The Swift v. United States case was again based on the Congressional power to regulate commerce; however in this instance the violation of the Sherman Anti-Trust Act provided additional leverage in the ruling that went against a collaboration of “corporations, firms, and individuals” that were conducting manipulation of livestock markets.  The conspiracy violated the law due to “its effect upon commerce among the States” as “shipments and sales involved were between citizens of diverse States” (Vile 36).  The court decision validated further that Federal regulation would prevail and these cases as well as others extended the scope of what oversight Congress had of commerce and industry.  Many other decisions ranged from labor and wage suits to gun control and segregation (Cox 642) illustrating just how broad and encompassing the concept or understanding of “commerce” can be applied.
The decision in Gibbons v. Ogden (1824) was vitally important for New York State.  With the monopoly broken, an increase in business ventures and entrepreneurs came at a pivotal moment in history as steamboat companies and merchants as well as farmers and manufacturers could gain from “unrestricted trade” (Cox 641) – just in time for the completion of the Erie Canal.  A result in the increased competition was a steady decrease in transportation costs just as New York City entered a golden era becoming the global shipping and financial hub.  After the U.S. Supreme Court nullified New York’s licensing law, the decade of the 1840’s saw over one hundred steamboat companies operating in the State.  That, along with other waterway and boat improvements meant the trip from Manhattan to Albany could be made in approximately ten hours and cost relatively little (Adams 747). American distrust of corporate charters and specially granted licensing by the State now seemed prevailing, as in such cases as Gibbons v. Ogden and later rulings the sentiment provided was that citizens “had a legitimate interest in promoting transportation and prosperity” which Federal regulation could provide in a widespread and reaching manner by its power under the Constitution (Foner 322).

During the twentieth-century and into the twenty-first, the debate has continued as to the Congressional role of regulation on business.  Each divisive side expounds on the welfare of the economic system as well as making use of Constitutional interpretations and Supreme Court rulings.  As Gibbons v. Ogden may remain a foundational case supporting the right of the Federal government to regulate commerce, the shift in political ideology as well as technological advances may factor into future outcomes.  The Supreme Court in 1824 understood this and perhaps that is why Chief Justice Marshall outlined their understanding of how the Constitution should be considered in such cases.  Regardless, it is obvious that the Court and Congress have increased the power vested into it by Article I, Section VIII in terms of regulating commerce.