A Little on the Transformation of Food in Early America


According to Richard J. Hooker in his work, “Food and Drink in America: A History” the transformation in the early American Republic from old world traditional methodology and ingredients to utilizing new world resources reflected cultural as well as sociological shifts that the opportunities and liberty of the continent could provide. 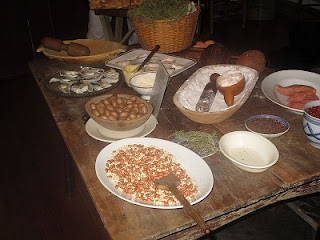 While the views on certain foods mingled in the minds of new world immigrants, those that had been established in the former colonial realm had adapted.  Together, this would develop into an American Style of food & beverage consumption.  With the early 19th Century canal craze, the transportation of products and foodstuffs began a new era for American food & drink.
It wasn’t just the relative ease of transporting these goods, but the method - particularly on the early Erie Canal - of moving people, that sparks interest for many today.  Combine that social and settlement pattern interest with food, and a new world of understanding comes into focus.
While the invention of the Steamboat predated the opening of the Erie Canal, in tandem they were a forge in creating the new America that would develop in the first half of the 1800’s.
“Much of the travel was by new conveyances, both on land and water. In 1817 New York State began to construct the Erie Canal...that was completed in 1825 and that became a major means of travel into the upper Mississippi Valley.  During the next several decades other canals were built, but only a few were really successful.  Also in 1817 a steamboat pushed upriver from New Orleans to Cincinnati, and within a few years there were steamboats on all the large tributaries of the Mississippi River system.  The railroad come soon after the canals and steamboats.  The Baltimore and Ohio Railroad, begun in 1828, was but one among a number that by the 1840’s were connecting eastern cities with each other and with the trans-Appalachian West” (Hooker 150). 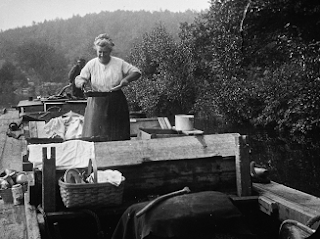 Again, the food was transformative, but those that traveled had their opportunity to feast,
“Food and drink on canal boats differed greatly according to the time and place.  The meals were served on long trestle tables that were set up three times a day in the main cabin where the men slept at night and in the women’s cabin where the  women and children slept.  Everything was placed on the tables at once.  One traveler to Buffalo over the Erie Canal wondered how such ample means of roast turkey, chicken, beef, ham, vegetables, pies, and puddings could be prepared in “the little closet aft.”  Equally bountiful were the meals served Charles Dickens, the English novelist, in 1842 on Pennsylvania canal boats.  Breakfast and summer consisted of tea, coffee, bread, butter, salmon, shad, liver, steaks, potatoes, pickles, lamb chops, black puddings, and sausage.  The midday dinner was the same, but without teach and coffee.  A passenger on the Wabash and Erie boat in 1854, however, spoke of breakfast beefsteaks that were dry, small and much underdone.  The captain, furthermore, “looked very black” if anyone asked for a second helping”
If all of that sounded decadent, the food service reported on Steamboats of the era put even the canal cooks to shame.  Further, the manners at such tables brought consternation from many observers; those unaccustomed to such fare were apt to be “...determined to get their money’s worth from the prepaid meals.”  It was noted by a Cincinnati editor that he witnessed “...one man begin his dinner by swallowing a beautifully molded dish of blanc mange, while others also did not wait for the hot dishes but began on tarts, pies, and jellies.” 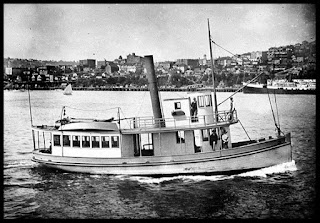 As “...well to do families [brought] along a slave or servant to prepare special dishes…”  bringing with them wine and liquors that they were more firmly familiar - those well to-do travelers begot the era of “floating palaces of gleaming white paint and shining brass served meals that were greatly admired... there was abundance and variety.  A traveler from St. Louis to Louisville in 1833 mentioned thirty-one different dishes put before twenty-two passengers…”
Most often, meats dominated the meal.  Everything from poultry, fish, beef, pork, and sausages prepared in various ways.  The culture of food in the America’s had transformed into the age of earlier European traditions of higher classes.  Meats dominating passengers meals is evidence of this, as those paying to ride steamboats or barges would have wished to be seen as distinguished within society.  In support of this is the decadent visual features of such watercraft as they emerged as a status of transportation.  This is seen in the early years of the Erie Canal as Captains outfitted illustrious tack upon their teams of high stepping horses that pulled brightly painted packet barges. 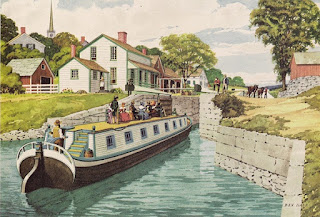 Food had become more than just sustenance for more and more of the populous - it was status, it was pleasure, it was more social culture than just the trappings of where your family had come from.