'a good Neighbourhood': Warrensburg and Early Colonization Efforts in the Mohawk Valley

Anglo-Irish Admiral Sir Peter Warren climbed the social ladder quickly during his time in the British Navy. Prior to earning the rank of Admiral in the mid-1740s, Warren maintained socio-economic connections in major Atlantic cities like Charleston, Dublin, London, and New York, the latter serving as the center of his own landholdings. As a part of an August 1735 grant conveyed to New York Governor William Cosby (who died the following year), the Mohawk Valley tract Warren obtained, he purchased from Cosby’s widow, Grace Montagu, in July 1736 for £130 New York currency. This tract sat along the south bank of the Mohawk River, stretching from its eastern edge at the confluence of the Mohawk and Chuctenunda Creek (present-day town of Florida) to its western limit at the head of the Schoharie Creek (present-day Fort Hunter) [1].

Warren remained closely allied with New York’s landed merchants and colonial officials as he aimed to colonize the tract and establish what historian Julian Gwyn called “the only serious attempt” at organized colonization in the Mohawk Valley. To steward this colonization project, Warren sent his nephew from Ireland, William Johnson, as well as another Irish emigrant named Michael Tyrell. Warren’s plan for the Warrensburg tract called for land cultivation, community organization, and resource extraction, principally frontier furs, lumber, and agricultural goods. Opening 200 acre lots for settling families to lease, Warren charged five shillings, nine pence as a quit rent. Through indentured servants and slave labor (roughly 27 slaves at Warrensburg by the end of 1744), Peter Warren provided Johnson with the resources to build a manorial estate along the banks of the Mohawk [2].

Warren’s plan to establish a “populated manor” with his nephew installed as a figurehead backfired when Johnson shifted his own entrepreneurial pursuits away from Warrensburg. In 1739, Johnson established his own trading post at what he called Mount Johnson (later followed by manorial homes at Fort Johnson and Johnson Hall) across the river from Warrensburg. Always business-minded, Johnson found this spot the “properest place on the Whole River for a Store house and Shop in the Winter, by reason of all the High Germans passing by that way in the Winter, and all the upper Nations of Indians, whose trade is pritty Valluable.” Of the surrounding community that Warren hoped would serve as Warrensburg’s tenants, Johnson labeled them “all people in Good Circumstance” who were “in hopes of haveing a good Neighbourhood” for themselves to prosper [3]. 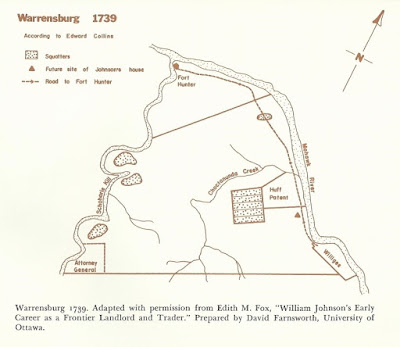 Despite Johnson’s failure to pursue his Uncle’s interests, Warrensburg and the surrounding area ironically gave way to colonial western expansion anyway, only without Warren cashing in. Perhaps an even greater irony lies in the fact that William Johnson’s diplomatic power-grab as a major Indian broker for the British Crown landed him a vast estate of his own, with his own tenants, and on his own terms.

The Mohawk District of the Mohawk Valley, which encompassed Warrensburg, steadily gained colonists and American settlers until the end of the eighteenth-century. A tax list from the beginning of 1766 shows that just under 340 male property owners (including Sir William Johnson) lived in the Mohawk District [4]. After frontier raids devastated the area during the Revolutionary War, settler numbers increased as the United States expanded. By 1790, roughly 4,400 settlers called the Mohawk District home [5]. 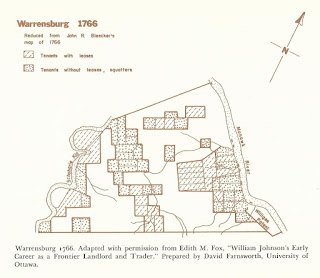 Warrensburg began and ended as an experiment. Admiral Peter Warren aimed to capitalize on his geopolitical land grab in the Mohawk Valley, and to install a manorial estate similar to those along the Hudson River, but ultimately found his entrepreneurial nephew an unpredictable barrier to the scheme. [6] However, the land along the Mohawk River’s southern edge near present-day Florida and Fort Hunter did not fail to attract its share of settlers. People arrived, colonized, and expanded farther west into the Valley both before and after the Revolution. Although the Warrensburg experiment did not produce a stream of manorial tenant for the Admiral, it served as the endpoint in an era of geopolitical land-grabs in the Mohawk Valley, thus paving the way for farmers, traders, and settlers to carve out spaces for themselves on the Mohawk frontier [7].

Nolan Cool is a recent graduate of Utica College and currently serves as the senior intern at the Utica College Center for Historical Research. Through several unique history-related programs, events, annual symposia, as well as social media (Facebook, Twitter, and the "Musings from the Mohawk Valley" Blog) and several digital collections openly available through the Digital History Project, the CHR promotes the history of the Mohawk Valley, Upstate New York, and beyond.