Dam That Creek! - Erie Canal dams of the Schoharie Creek 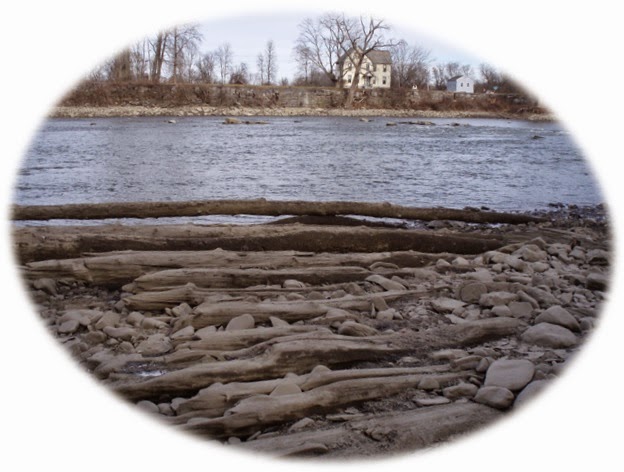 Upon arriving at the Visitor Center this morning, there was a pleasant surprise that the water level was low enough to give a peak at the remains of several dam efforts built across the Schoharie Creek for purposes of the Erie Canal.

The Schoharie Creek is the watershed for an area of nearly a thousand square miles and is notably the principle southern tributary of the Mohawk River.  During the planning of the original Erie Canal, a survey by Engineer Charles C. Broadhead, noted the creek surface would be low and a dam would be required to raise the water surface approximately ten feet.  This was in order to avoid the cost at the time of constructing an aqueduct, but it would also allow the use of the creek to feed water into that portion of the canal without additional works.

The first dam was built in 1821-1822 and was a timber structure filled with stone and anchored in masonry.  At eight-feet in height and spanning six-hundred fifty feet across the creek the original dam allowed for a rise in water level two feet less than Broadhead’s calculation due to the use of Lock #19 (with a six foot lift) on the western bank and the additional “Voorhees” Lock #18 (with a seven foot lift) near Caughnawaga.  On the east bank of the Schoharie Creek a guard lock was constructed to regulate the water and was only closed at times of high creek levels or fast moving current.
While the creek could still prove treacherous, the practice of open crossing continued until the erection of the Schoharie Creek Aqueduct in the early 1840’s.*  Even after the canal rose above the creek instead of through it, the dams were vital to the operation of the system.  Though the maintaining of those dams proved to be difficult, costly and frequent, they nonetheless were required for decades to come. 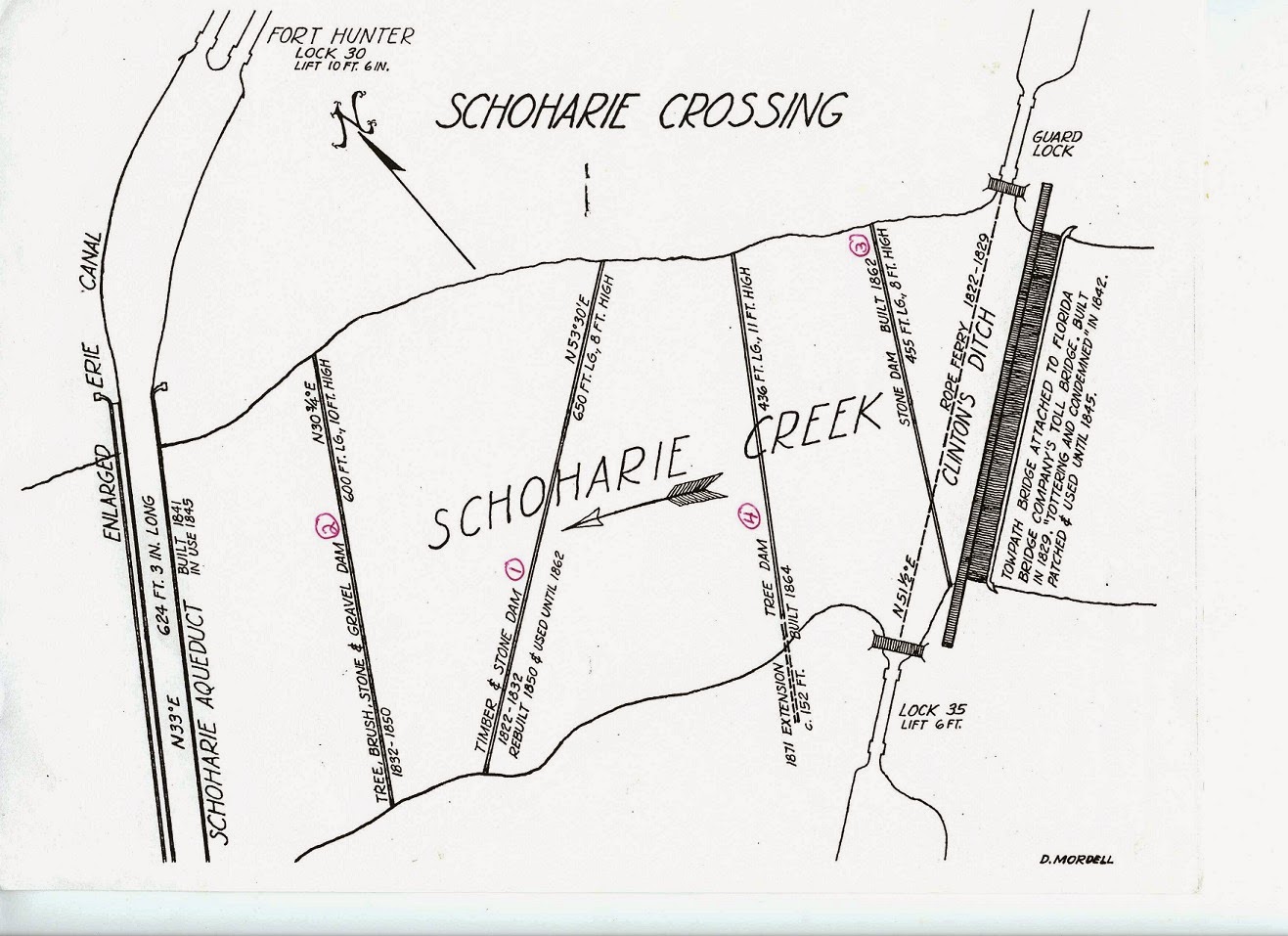 This first dam lasted about ten years and was rebuilt in sections after severe flooding in March and April of 1832.  After the Schoharie Creek Aqueduct became operational in 1845, the waters of the creek continued to be fed to the canal by use of the 1820’s “Clinton’s Ditch” and a nearly ten-foot high dam.  This version of the dam was of constant complaint and required continual patching and securing at a growing expense until 1849.  Devastating flooding in 1850 completely destroyed the dam works in the Schoharie Creek.  Use was then made for over a decade of a repaired version of the original 1820’s dam.
The last dam constructed across the creek for the Erie Canal was completed in 1864.  This time at eleven feet in height and over four hundred thirty feet in length, the dam was built from timber secured by large bolts into five layers between two stone abutments.  More than fourteen hundred trees at lengths between seventy to ninety feet and butt diameters between eighteen to twenty-two inches were used.  Gravel and stone fill was used to secure the structure further.  This dam cost well over twice that of the original, due in part to inflation but mostly because of scarce labor and rise in material prices due to the Civil War.  The final bill was $44,502.27.
This dam also saw a great deal of structural damage from flooding and ice.  The rains of 1869 and 1879 caused flooding that broke the banks of the creek and injured the feeder canal as well – sweeping out portions of the walls.  While the dam was repaired, lengthened and permanently docked to the embankments, it required annual maintenance for leaking and structural breaches.  Another section washed out in 1894 and repairs were made yet again to the entire structure.  Although the dam needed constant repairs it effectively lasted until a new canal was ready to take over.  With the opening of the Barge Canal in the early twentieth-century, the dam and the aqueduct were no longer necessary to the system.